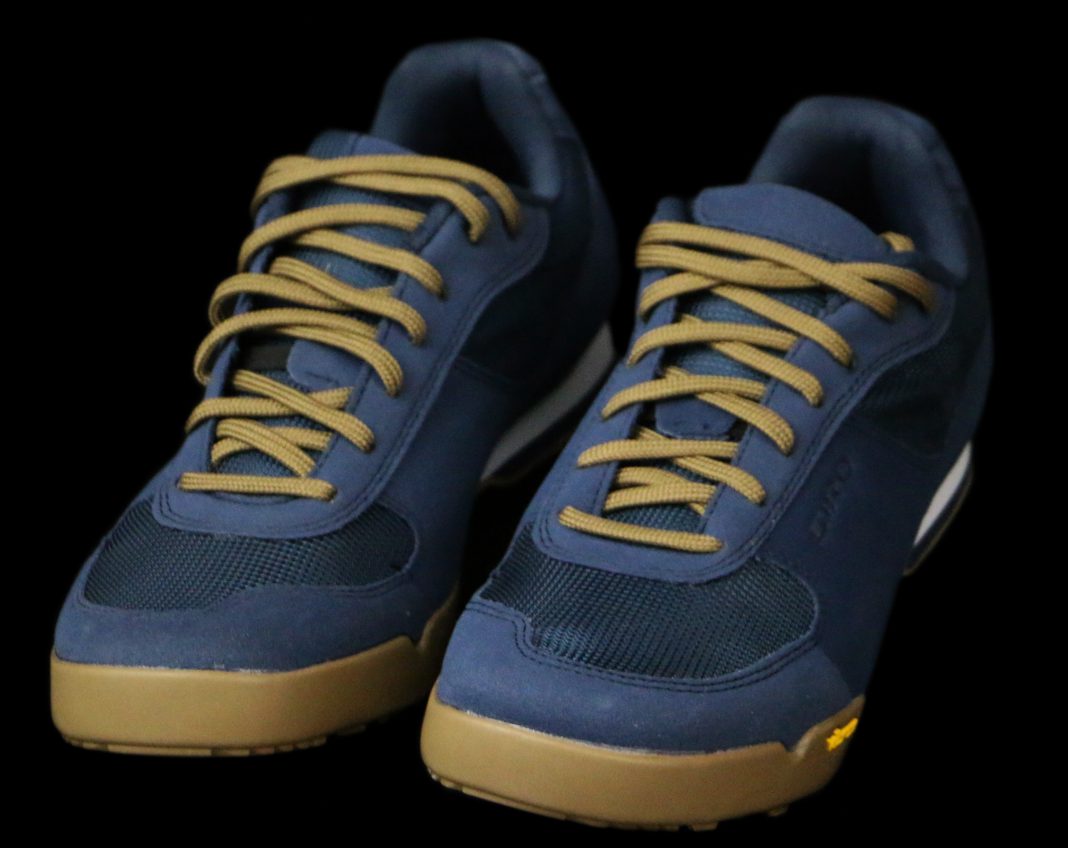 The Giro Rumble shoe mixes a slightly more casual aesthetic with the much needed features of a MTB shoe. The Rumble™VR is a versatile shoe that combines performance riding features like clipless pedal compatibility with the walkability of a grippy Vibram® outsole and the comfort of a light hiking shoe. With an upper made from a supple, synthetic and mesh, and an injected inner shank to help transfer your power to the pedals, it’s a true cycling shoe that doesn’t compromise the flexibility you need when you’re walking on the trail. 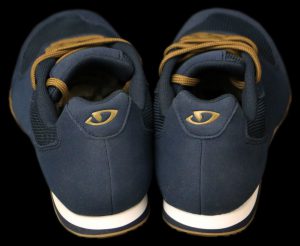 With a much more casual look, similar to that featured in the Giro Chamber, the Rumble is almost a playground throwback. It retails at £79.99 and is currently selling on Cyclestore.co.uk at £63.99. This leans the shoe right towards the cheaper end of the market. Appealing to an audience that have to mix a lot of walking in with the cycling, these technical shoes have been designed with that combination in mind.

The upper part of the Rumble is made from a breathable synthetic and mesh. This is for improved ventilation although it’s clear from a look at the shoe that it hasn’t been designed for the depths of winter. The shoe is closed entirely by laces, similar to that seen in Giro’s Road Shoe range. We weren’t entirely convinced about this for MTB as the laces can get worn & wet quite quickly, but we were up for giving it a go. 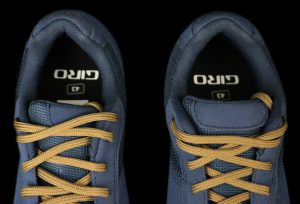 The underneath of the shoe features a molded SPD compatible shank. It’s made with a Vibram rubber outsole. Very similar to that which features in the Aplineduro, although far less rugged. This shoe is definitely pitched more towards the summer months when you’re walking over leafy mud & gravel rather than trudging through it ankle deep. Although this saves slightly on the weight of the shoe as it tips the scales at 425g for a size 42.

The foot beds in the shoes are the Giro Eva footbed. This is not quite as good as the SuperNatural fit kit that Giro offer however we haven’t really seen another shoe company spend time and effort designing the support needed, other than the Specialized Foot beds. With support for the medial and longitudinal foot arches, this reduces the risk of injuries in the knees & hips. Allowing a more fluid motion, opening up the whole of the glutes. It’s very clear that Giro have put time and development into the ergonomics of the shoe.

Out of the Box: 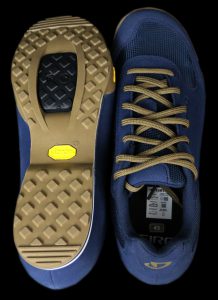 The Rumble is a comfortable shoe, designed for walking we’d expect this to be felt right from the outside. The tongue is nicely padded and it hugs the foot well, although the foot doesn’t feel very well supported as in other shoes. The heel is grippy so the lift is kept to a minimum both walking around the house and getting out in the saddle. There’s a reasonably spacious toe box although the protection is somewhat lacking, so we wouldn’t recommend the tougher terrains.

The aesthetics of the shoe are good, although giro have opted for very simple colour schemes and this almost looks like an after thought. Available in black/glowing red or dress blue/gum, the names aren’t the most hard core. We’re aware that the shoe comes with a depreciated price tag over it’s competitors, although we can’t help but feel that this shines through. The materials are somewhat lacking in quality and it doesn’t quite hold it’s own at the top end of the market like most of the shoes we’re used to from the footwear giants.

On to the Bike:

The Rumble is very comfortable to walk in, rare to feel like a normal shoe despite being designed for cycling. This is due to the flexion through the mid sole. Due to this the stiffness through the sole of the shoe is massively compromised on the bike. The shoe’s don’t offer the same power transfer as the majority of competitors, which is one of the main areas of performance. Great for the boring walk to the top of the hill, useless to smash down. The cleat are is narrow and set in quite deep. It might be worth fitting a cleat spacer to make the whole process slightly smoother.

The laces hold well, although once wet & gritty the quality is affected. As with the rest of the shoe, the durability starts of very average and deteriorates from there. We’re normally massive advocates of the Giro range, although we feel like the rumble has let them down. The shoes are quite tough to clean after a long ride, & the “dress blue” colour certainly wouldn’t last long through the winter.

The ventilation on the Rumble is good and well considered through the upper part of the shoe. Although they’re very quick to take on water & not too great at getting rid of it. The feet can get quite cold if you’re out in conditions that aren’t quite matched to those of the sunny continent. For 80% of the standard British weather we thought that these shoes just don’t quite cut it.

The Giro Rumble shoe mixes a slightly more casual aesthetic with the much needed features of a MTB shoe. On paper they feature all the performance factors needed to make a good pair of shoes. But unfortunately in reality they just don’t quite perform. Giro have attempted to make an average, mid range set of shoes, and unfortunately that’s exactly what they’ve done. Keeping costs down we feel that the quality of construction has been compromised as a result. Giro have put this shoe in the ‘dirt’ section of their website, and we’d have to agree the Rumble suits a more casual shoe.