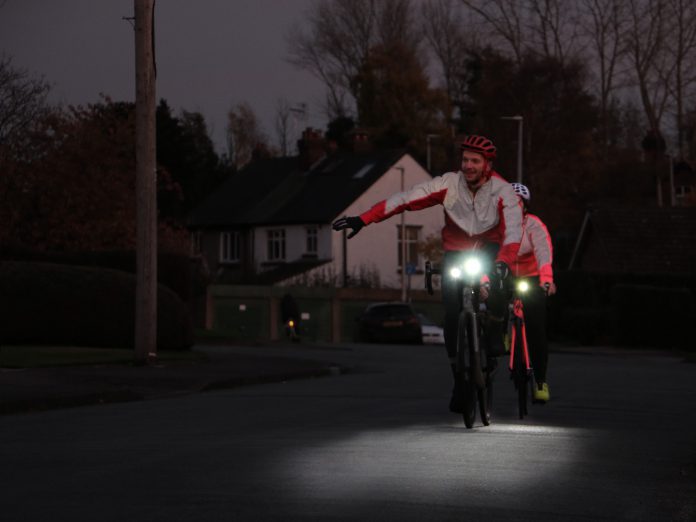 The nights have closed in fast, with the clocks going back it’s now super important to keep yourself safe if you’re riding home from work or later into the evenings. We’ll always have to be vigilant when riding in the dark, but hopefully with these tips and tricks you can make your ride a bit safer!

Whether you’re on lit city streets, or pitch black country lanes – it’s important to consider a variety of different scenarios to keep yourself safe. You’ll both have to see and be seen.

Some of the steps are more obvious than others, such as good lights or bright kit. But we’ve also added a few you might have missed.

In the UK it’s mandatory to have a working rear and front light if you’re riding outside of daylight hours. Unfortunately that’s just the law, though you should be thankful as that will keep you safe riding in the dark!

If the route you’re riding is lit well by street lights, then you’ll primarily need a light for other road users to see you. In this case a flashing front light might be more use than a constant one.

— WHICH MUSCLES ARE USED IN CYCLING —

On a country lane or a route where there’s no lighting provide, you might need something a bit stronger than a low power flashing light. Anything above 400 lumens would certainly do the trick, and something nearer 800 is optimal. But make sure on the brighter lights you don’t dazzle oncoming traffic, a point we’ll touch on later! The faster you ride or the more technical the route, the brighter light you’ll need.

Just because you already have a light, doesn’t mean another is a bad idea whilst riding in the dark! You could have a second light flashing to make sure that people can see you coming and don’t think you’re just part of the street lighting. It may seem unnecessary, but it wouldn’t be the first time a car has assumed a bike isn’t moving towards them! It’s easier for cars and other vehicles to work out how far away a constant light is than a blinking one.

A helmet light can be a good addition, but it’s not as good as a primary light source as if you turn your head cars and vehicles won’t be able to see you as easily. Best to stick to the main one on the bars for now!

Be respectful of oncoming traffic.

If you’re riding with a 1300 lumen light, or one of the punchier lights in the range, then it’s easier than you think to dazzle oncoming cars or vehicles. Often on remote bike paths you’ll see users dim their lights as they approach so that each rider can see the trail.

Some of these road lights are more dazzling than car headlights – especially when they’re pointed upwards. Make sure your lights are in the right direction so they can illuminate your way and not blind a driver! If your light is more geared towards off road riding – it might spread light much wider than you think. A beam pattern, road orientated light can be better suited, though most allow you to turn down the brightness. This will also make your battery last longer!

Use a tracker or tell a friend.

iPhones, Garmin, Strava, Specialized and plenty of other apps have beacon or trackers on that you can alert your friends when you start or finish riding – as well as where you are or if you’ve got into any trouble.

Letting someone know before you leave, where you’re planning on going and when you’re planning on being back can be incredible valuable if anything goes south while you’re out on the bike. 99% of the time you won’t need it, but you’ll be grateful the time you do! Especially if you run into something simple like a mechanical but can’t get hold of anybody, or you’re headed to somewhere more remote.

Not the most fashionable items in the wardrobe, but certainly the safest. Adding reflective strips to your bike or gear can really improve visibility. As can wearing brighter colours on your upper half. You don’t have to go all out and dress like a Christmas tree, but a lot of people would prefer it if you did! After all, safety has to come first when riding in the dark.

A white reflected on the front, pedal reflectors and a red reflector on the rear are also a legal requirement. The elliptical motion of reflectors is much easier to see for cars and other vehicles approaching you from behind. Some overshoes also come with a rear light built into the back to emphasise this motion. Gloves can also be a great area to keep lit so people can see you indicating.

It can’t hurt to be seen from side on too, in fact it’ll certainly help motorists in a hurry not pull out on you. Some kind of reflective strip on the edge of your bike, jersey or backpack could help keep you safe. It’s much easier for other road users to see a reflective strip instead of high vis.

If you’re riding on limited lighting make sure you don’t ride above your limits. Pot holes out of the blue, cars that don’t see you, it can be a dangerous ordeal.

Make sure you keep an eye out for slippy leaves or exposed grids as it’s very easy to lose the back wheel. Make sure you have enough light for the speed you’re riding to be safe. Even if you’ve ridden the route a lot, unexpected obstacles can be in the way of the route when riding in the dark!

If there are a few if you it’s often a good idea to leave a bit of extra space to the wheel. This can give you a bit more reaction time if anything happens or there’s something none of you see. A dazzling rear light can also be an issues if you have it on too bright, you don’t want to leave your riding buddies struggling to see!

Making sure you pick a line can both help you avoid potholes and obstacles but also help drivers to see you. Drivers usually look further ahead down the road, so you can move into their field of view. You don’t have to ride right in the centre to block the carriage, but moving a metre or so out from the edge of the road can be safer for everyone.

Have a spare light.

Invaluable for if your lights run out of battery or die, a spare light in your bag can get you out of a tricky spot. Making sure you charge your lights before your leave is a mistake you won’t have to make twice!

Even if you run your spare light as the flashing one on a low power setting, it’ll be there just in case your main light dies. There’ll be sections of lighting that you’ll be able to dim the lights as your eyes adjust to make them last longer. A dynamo can be a great way to stop your lights dying while you’re out on a ride.