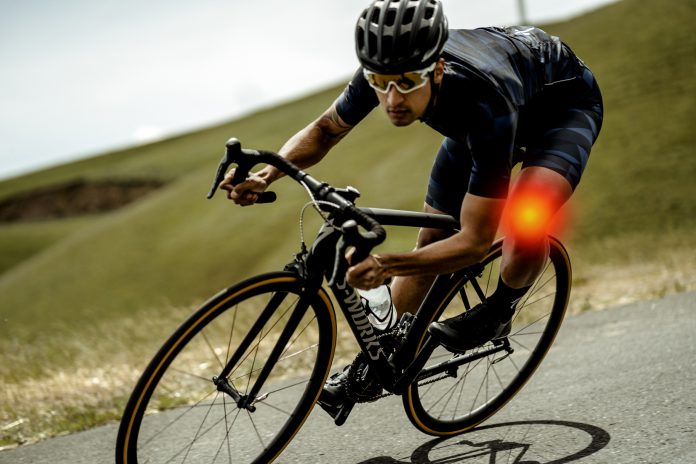 We’ve all been there, out on the bike when the knees start to hurt – it’s a real pain. With the bad joke out of the way, we want to look at what’s really causing your knee pain and what you can do to prevent it. More often than not it’s not a problem in your actual knee, the pain can come from your hips, gluten, lower back, cleats… the list goes on!

It’s very common for cyclists to experience knee pain, studies find up to 30% of injuries in cycling evolve around the knee and most of the time it can be a very simple fix. So don’t panic if you’ve experienced some pain and you’re not entirely sure where it’s coming from. There should be a solution for you in the article below.

Some of the different, more common types of knee pain are:

If you get any knee pain at all then it’s usually best to start by looking at your hips/ankles. Having had a knee injury myself, I was treated by the team sky bike fitter Phil Burt – who immediately checked that the glutes were firing, the hips & back were aligned and there was no extra tightness in the ankle.

Acting as a hinge between the upper and lower leg, it’s rare the issue is within the knee. It is often cause by a lack of movement elsewhere, causing the knee to over compensate in a certain direction.

A professional bike fit to evaluate your position will often remove a lot of the issues causing knee pain. Saddle height, cleat position, saddle angle – amongst other things, can all play a major part in your pain.

Lateral and medial knee pain – pain at the side of the knee. 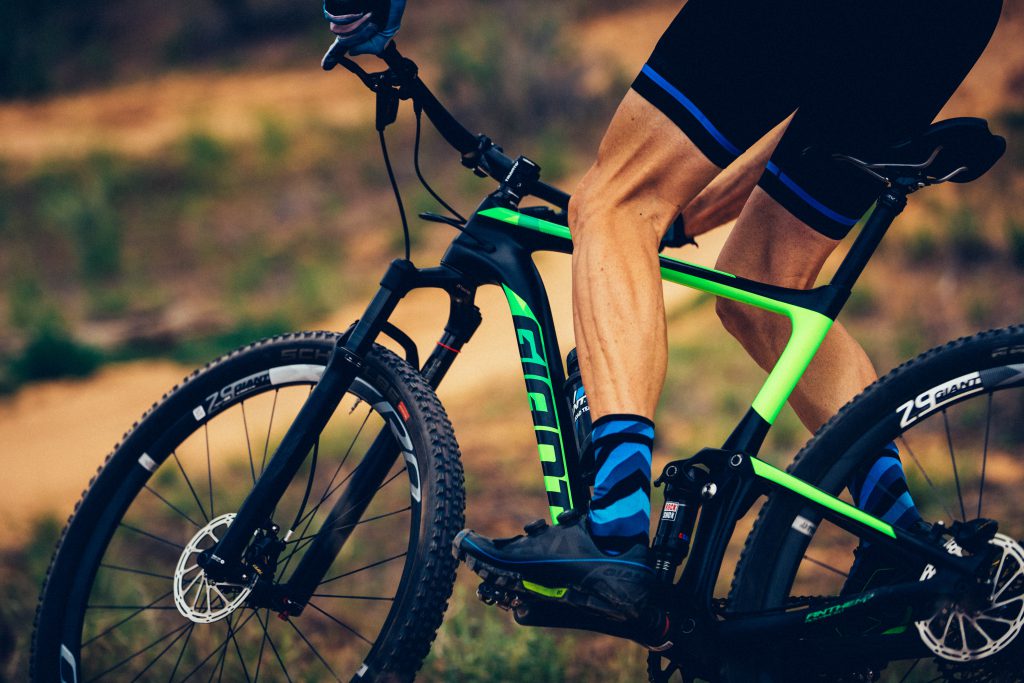 Pain on the inside of the knee is known as medial knee pain, whilst lateral refers to the outside. Often this is caused by tightness in the upper leg. A lot of cyclists blame their quads or IT band (the iliotibal band) for this. This muscle runs down the outside of the leg & is often known for pulling on the knee. Physio Sarah Connors explains a tight IT band is often just caused by muscles in the hip or lower back not functioning properly.

Cleats can be a huge cause of pain at the side of the knees. Often many people decide that their feet should be pointing forward the whole time. A lot of cyclists naturally cycle with the heel facing a slightly different direction – but with the knees and hips still aligned. This is where a lot of float in the cleat can help you find your natural position. If you’ve recently changed your cleats and experienced this, you could use a pedal system such as Speedplay with a lot of float to correct it.

The cleat should sit directly below the ball of your foot – so that the power transfer is through the right part of the foot. A professional bike fitter would be able to help you make these changes to perfect your position and eliminate the problems fairly swiftly.

Anterior knee pain – pain at the front of the knee. 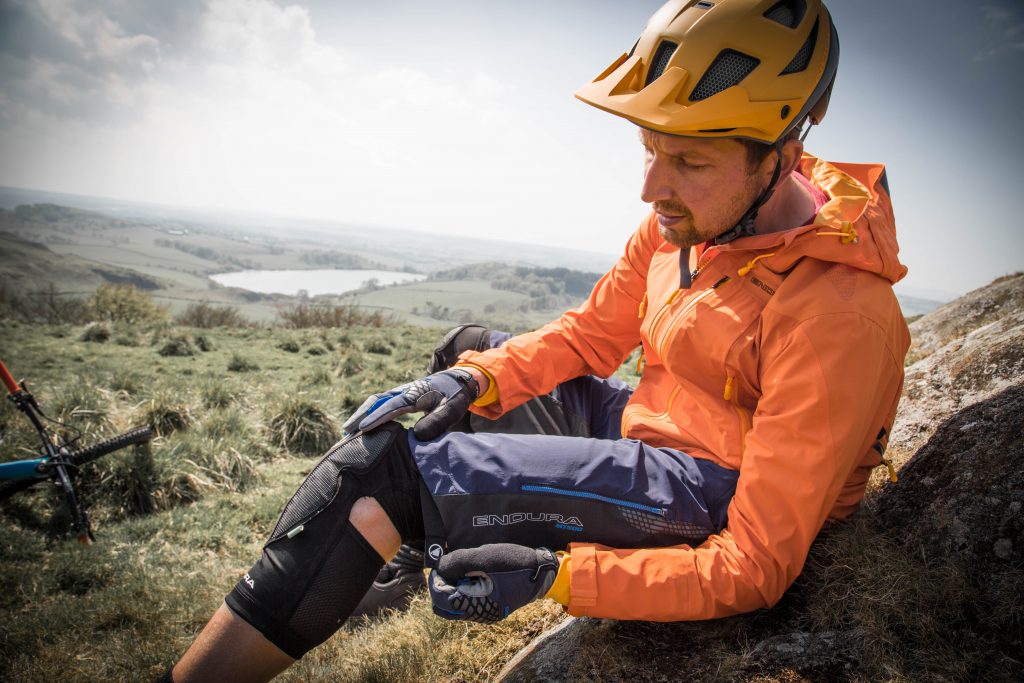 One of the most common types of cycling knee pain, this is often similar to laterial knee pain in that it often originates in the upper leg muscles. This can be down to a bad bike fit causing the muscles to over-work. Or just over use injury without enough stretching, foam rolling or recovery. These things play a massive part in training and keep your muscles supple enough to keep up with the training load.

The tracking of the knee cap is also very important here. If it feels like it gets stuck or clicks/gives way then your patella tracking could be off. This is very common, and not something to worry about but definitely something that needs to be addressed. The patella needs to track smoothly to allow the knee to function properly, this is often done by keeping your quadriceps loose through massage or foam rolling.

The quads can become very short and overused very quickly in cycling. You should cycle from the glutes and a good bike fit will put you in the position to do this. If you’re very quad dominant this can cause you trouble later down the line. If the knee is held in the wrong position for a long period of time it can become very inflamed and this can cause a lot of damage. 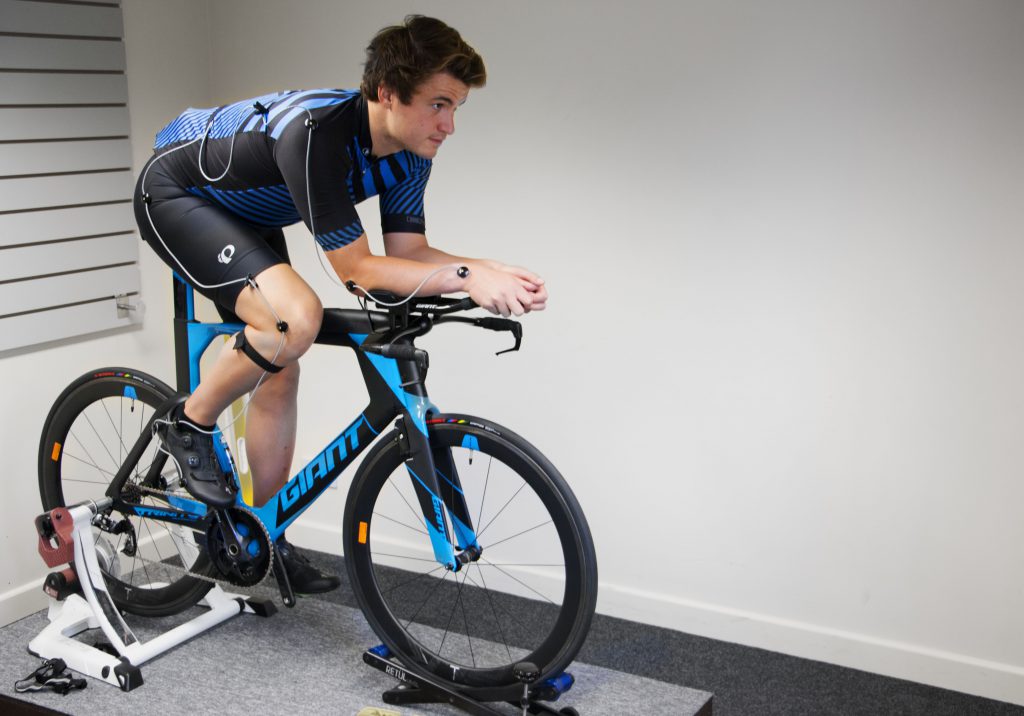 A bike fit to make sure that your knee isn’t too far forward or held in the wrong position can be a great place to start to fix this problem. It may feel like a more powerful position to have a low saddle – but it’s not. It activates much smaller muscles and doesn’t allow you to use the whole leg. Things like crank length and cleat position can also be changed to make sure that the movement of the leg is being optimised.

Gently foam rolling all the muscles in the upper leg will relieve all the tension. Roll slow and stop to focus on any tight spots – using it as a trigger point exercise. It’s not designed to be done as fast as possible – really get into the muscles and allow them to relax. A sports massage is another fantastic way to release the tensions. Rolling the inside & outside of the quads is important too.

— OSTEOPATHY FOR CYCLISTS, CAN IT HELP? —

Posterior knee pain – pain at the back of the knee. 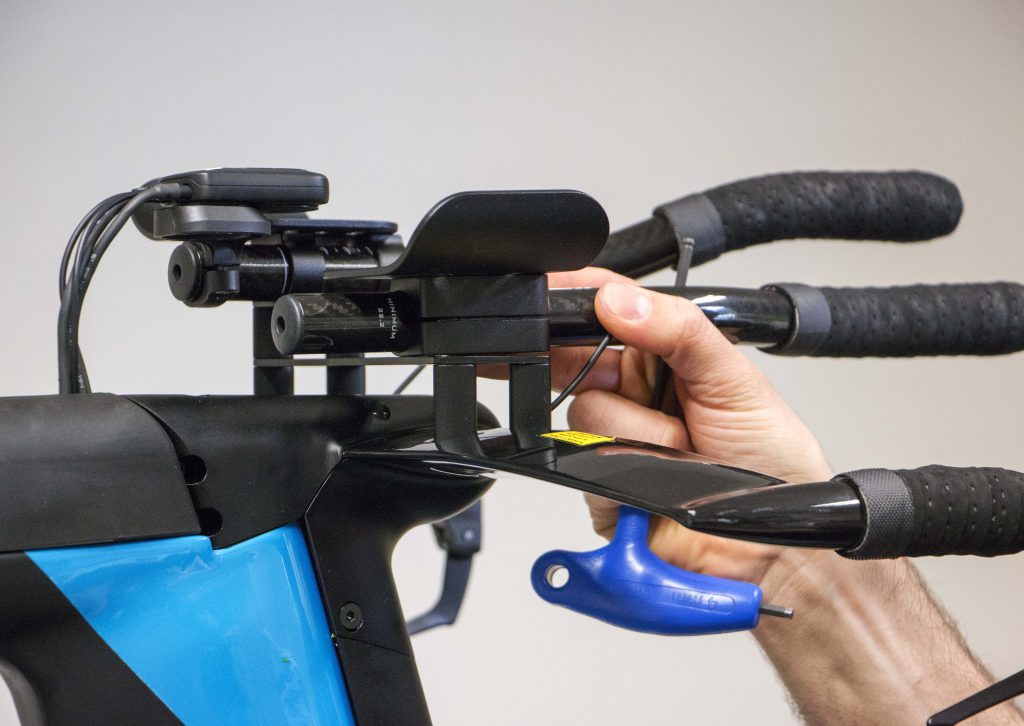 As you may have guessed, if the pain is being caused at the back of the knee, this is often because of the hamstrings. But that doesn’t necessarily mean that the hamstrings are the origin of the issue.

The most common cause of this pain is the saddle being too high, that will put a lot of strain on the hamstrings. So if you’re lucky enough for the fix to be that simple, a bike fit will iron this problem out immediately. Although the pain can also be coming from excessively tight gluten or back – looking higher up the chain of muscles shouldn’t be overlooked.

This knee pain could also be caused from your saddle being too far forward or back – the position of the saddle in relation to the pedals is very important, so make sure you’re getting it right!

Posterior pain can be from over-extension – a high saddle will overload the knee as the muscles can’t cope with the strain when they’re so extended. If this is the cause you’ll feel the pain where the hamstrings meet the knee. 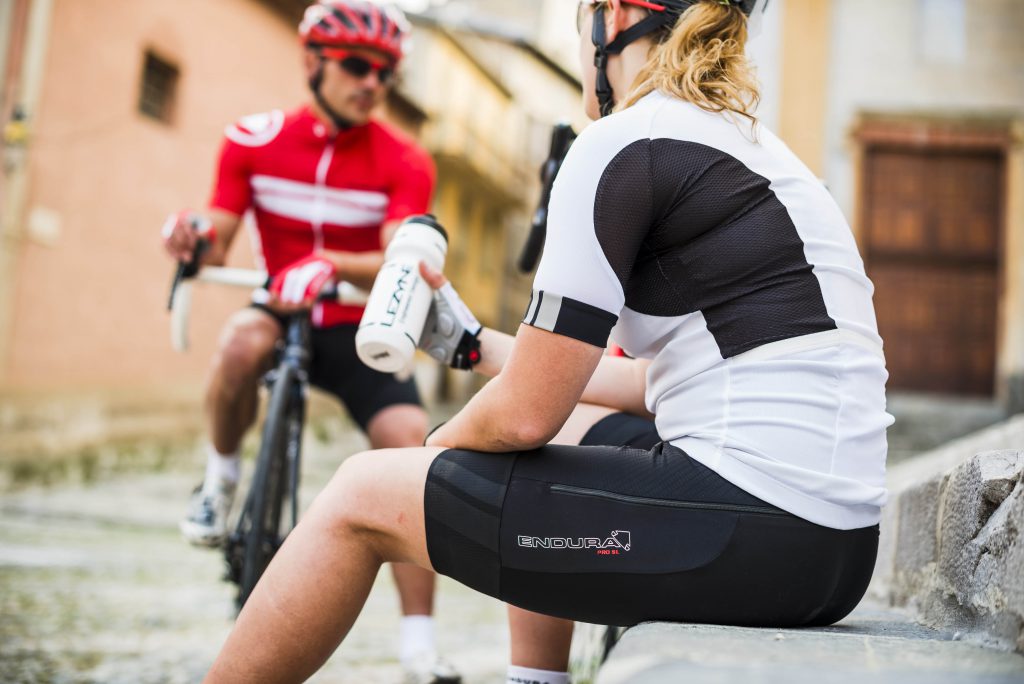 It’s quite common for cyclists to have very short hamstrings, similar to the fact they have very inflexible thumbs. Many people don’t think that cycling uses the hamstrings – but the pulling motion shortens them over time. A regular stretching routine can help to keep the muscles long – although make sure you don’t overstretch them.

Knee pain as a result of weakness in the core.

In every sport it’s usually fundamental to have a strong and mobile core. Flexible hips, strong gluten and a firm core are the basic muscles that allow you to perform at any level. If any of these are failing, then your body will need to compensate elsewhere and this will begin to cause issues. It might not happen immediately, but it is likely to occur over time. If you don’t know where your glutes are – you sit on them. It’s your bum muscles. 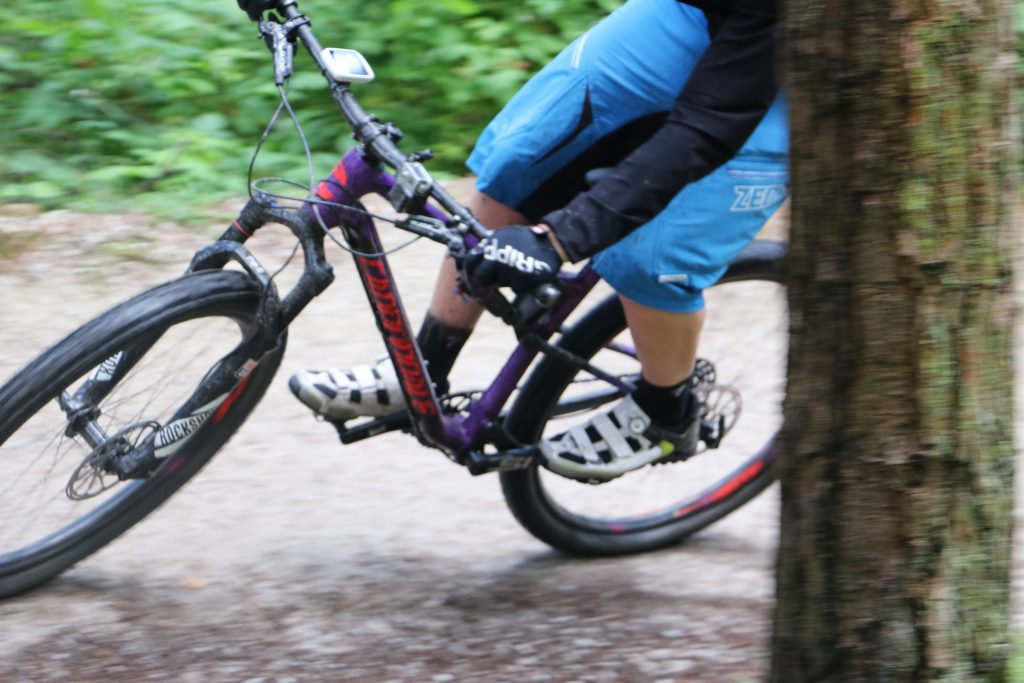 With weak glutes & inflexible hips cyclists often overcompensate and use their quadriceps to move the bike. This can feel powerful and be a great short term “fix” to any problems you have – but over time this will put a lot of pressure on the tendons around the quads & the knees.

Weak glutes can often lead to the leg tracking in a very inefficient movement. If the knees aren’t aligned and firing straight up and down, this could cause you a lot of issues.

This can all be fixed by adding a regular strength and conditioning routine to your training programme. Elastic band work, body weight exercises and a small core circuit at home will suffice, you don’t necessarily have to fork out on a gym membership to see the benefits!

Often referred to a “Spring Knee” – overload pain is caused simply by overloading the legs. Trying to ride like Chris Froome or Peter Sagan and doing too much, too soon. It takes professional cyclists decades to build up a strong enough endurance base to accomplish the tasks they seem to make easy, and it’s very easy to overlook that. 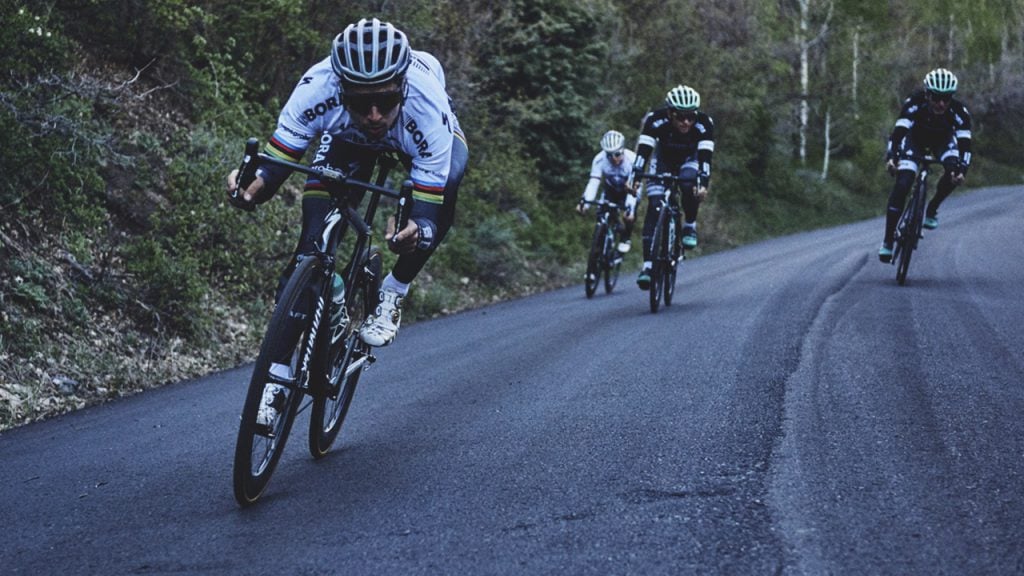 Doing the basics correctly such as strength and conditioning, stretching and getting a bike fit before you build up your mileage will really help the body. This will make sure it’s supple enough to begin to handle everything you throw at it.

Overload doesn’t just mean riding particular far, any number of issues can be caused if you suddenly throw a lot of intensity at the legs. So take it slow and make sure you’re ready before you build up to that Sportive.

There often is no real quick fix to pains in your body that come on over time – it takes a long rehabilitation process to iron out the imbalances your body may have. But if you have a good bike fit, keep your body flexible and strong then you should be able to ride pain free. They’re all so closely intertwined, and as you learn more about your body, you’ll be able to feel when something isn’t right.

To learn more about the bike fits we offer click here.