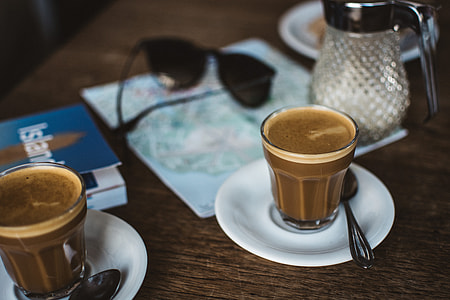 You might be reading this on your 3rd coffee off the morning, or just before a big ride with the caffeine pumping through your system. Most people can’t function in the morning before they’ve had their daily dose of coffee. Big ride, long day at work, early start? Coffee. Though also associated with bowel movements and dehydration, is coffee actually good for you?

Coffee contains caffeine which is a stimulant. There’s a reason that caffeine has been on the WADA monitored substance list for many years. Though it would be impossible to ban the mainstream drug, it’s effects are evident. It can be used to increase alertness, memory, mood and energy. There are plenty of myths floating around involving your morning coffee. So we had a look at the science involved.

Caffeine also acts as an active ingredient in boosting your metabolic rate. It can have an effect of up to 10% helping you shift through some of that extra weight. As well as helping burn fat during exercise we consume fewer calories through the day as caffeine will suppress your appetite. Though it should be remembered that coffee itself comes with more calories than you thing!

A lot of athletes say that caffeine helps them to focus on the goal at hand as well as reducing relative perceived effort (RPE). That means you can push harder and feel the same! RPE studies have proven that athletes drinking coffee before exercise feel less fatigue and effort during the same sessions!

When caffeine gets into your blood stream it’ll increase your heart rate and blood pressure. Fat stores begin to break down and fatty aides are released, this is one of the reasons why you’ll begin to feel energetic! It’s also why endurance athletes see a large increase in performance as they’re then able to utilise more fat stores and burn less glycogen.

Coffee also contains a lot of natural antioxidants that can help reduce the risk of disease. These antioxidants help to clean the blood and reduce inflammation.

Though it also acts as a diuretic causing you to be more dehydrated than you usually would. This is why after a few coffees you’ll of ten need a trip to the bathroom.

Over time you’ll also see a reduction in the impact the caffeine has. This is why a lot of athletes reduce their caffeine in take 2-6 weeks out from a big event. So that on the day of the event they see a much greater performance boost.

You can also get withdrawal symptoms from caffeine. Coming off caffeine has been associated with headaches, irritability, rapid heart beat, and muscle aches. It’s also best to stop drinking caffeine around 2/3pm so that it doesn’t affect your sleeping patterns.

Make sure however much coffee you consume you do so in moderation and not without testing the effects first. If you’re already used to a lot of caffeine then you may not see a performance increase as large as you would if you don’t consume any at all. There are a variety of other ways to boost performance instead of increasing the caffeine intake – but we hope whichever you opt for, you make it to your race goals this season.