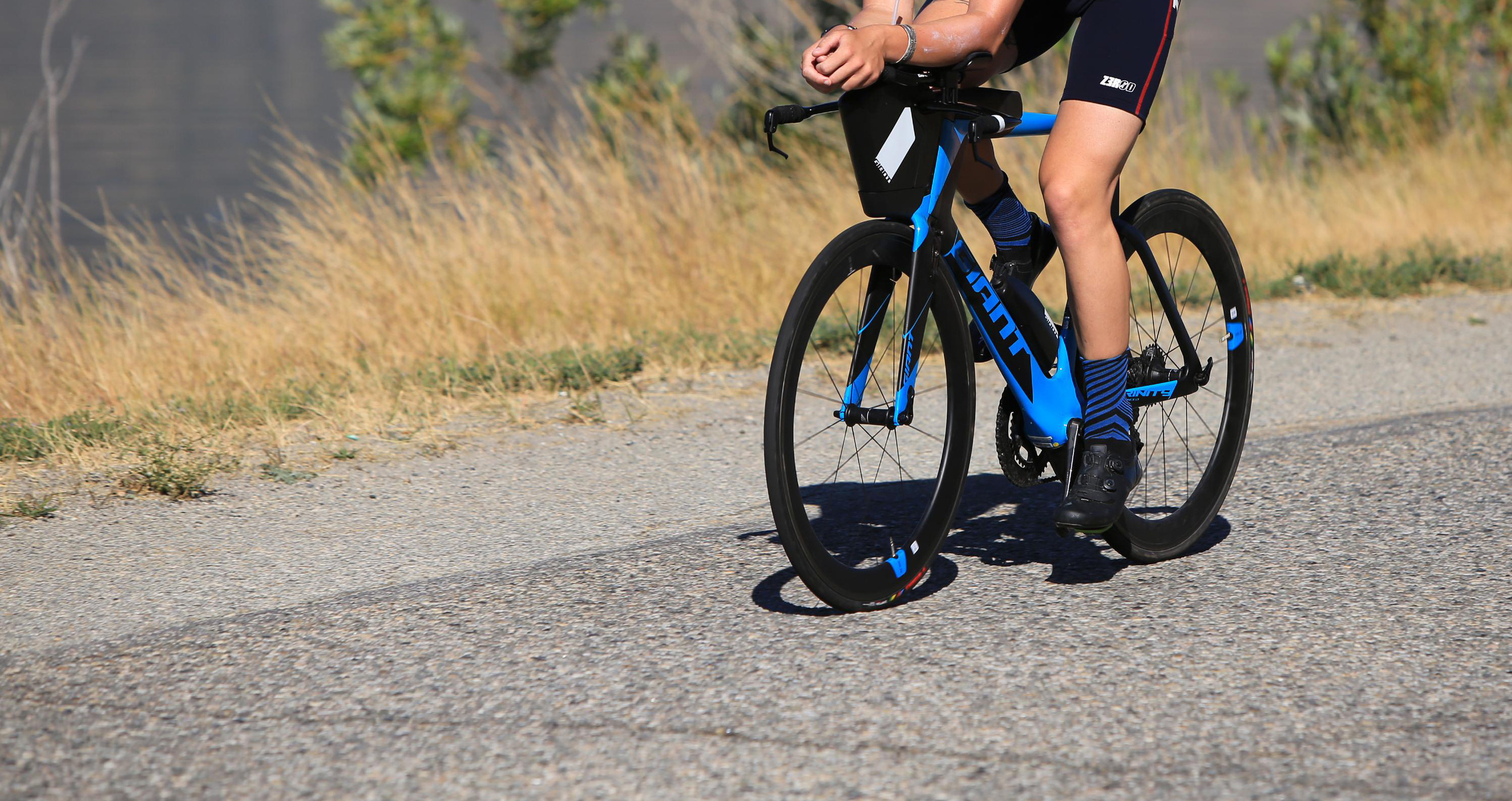 It’s been a while since this weapon was released, and it’s success speaks for itself. Being ridden by Tom DueMoulin to the overall win at the Giro d’Italia. The Giant Trinity Advanced pro certainly has the pedigree, although somewhat under marketed compared to a lot of other ranges such as Specialized or Cervelo. It’s not as out there and in the spotlight, but one things for sure, it’s been making waves. 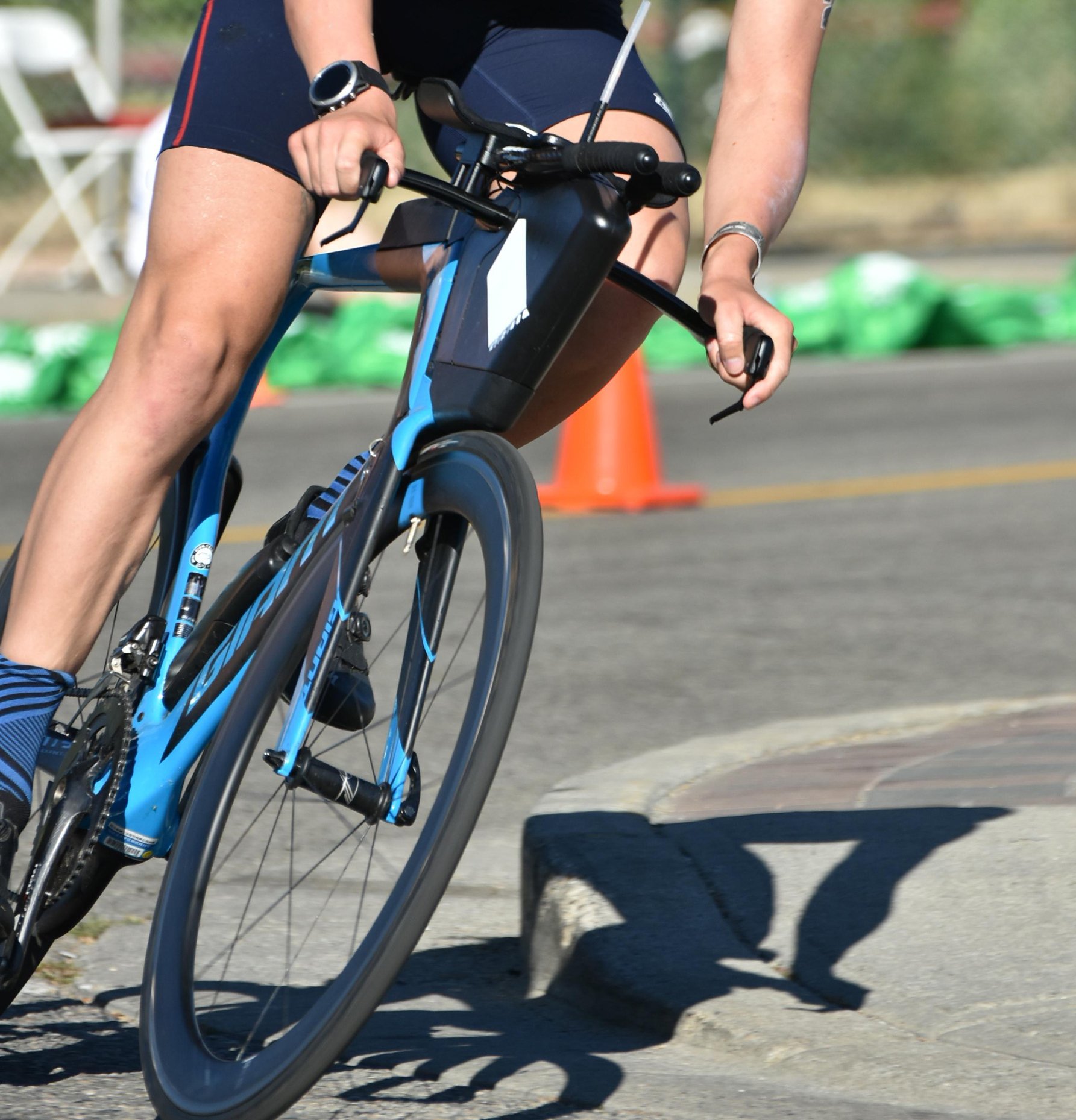 We gave the bike to Jack our triathlete at the start of the year so he’s now been the bike in Triathlon’s for the majority of the season, culminating at Long Distance World Champs in Canada and Kona, so we feel there’s a solid amount of evidence to think about. Previously on the Canyon Speedmax Pro SLX 9.0, he’s no stranger to an agressive ride.

Giant have always struggled on the exposure side of their range, although only in certain countries. We know down in Australia it’s one of the bikes of choice. And why? Because the country’s cyclists are value driven, and this is definitely one of the best value bikes. You can check it out on CycleStore today.

Featuring a new improved front end Giant have really focused in on the minor details that are going to give you the biggest aero advantage. If you’re a triathlete they claim that the hydration system actually makes the bike faster. So whether you’re going to be drinking or not, it’ll be saving the watts. 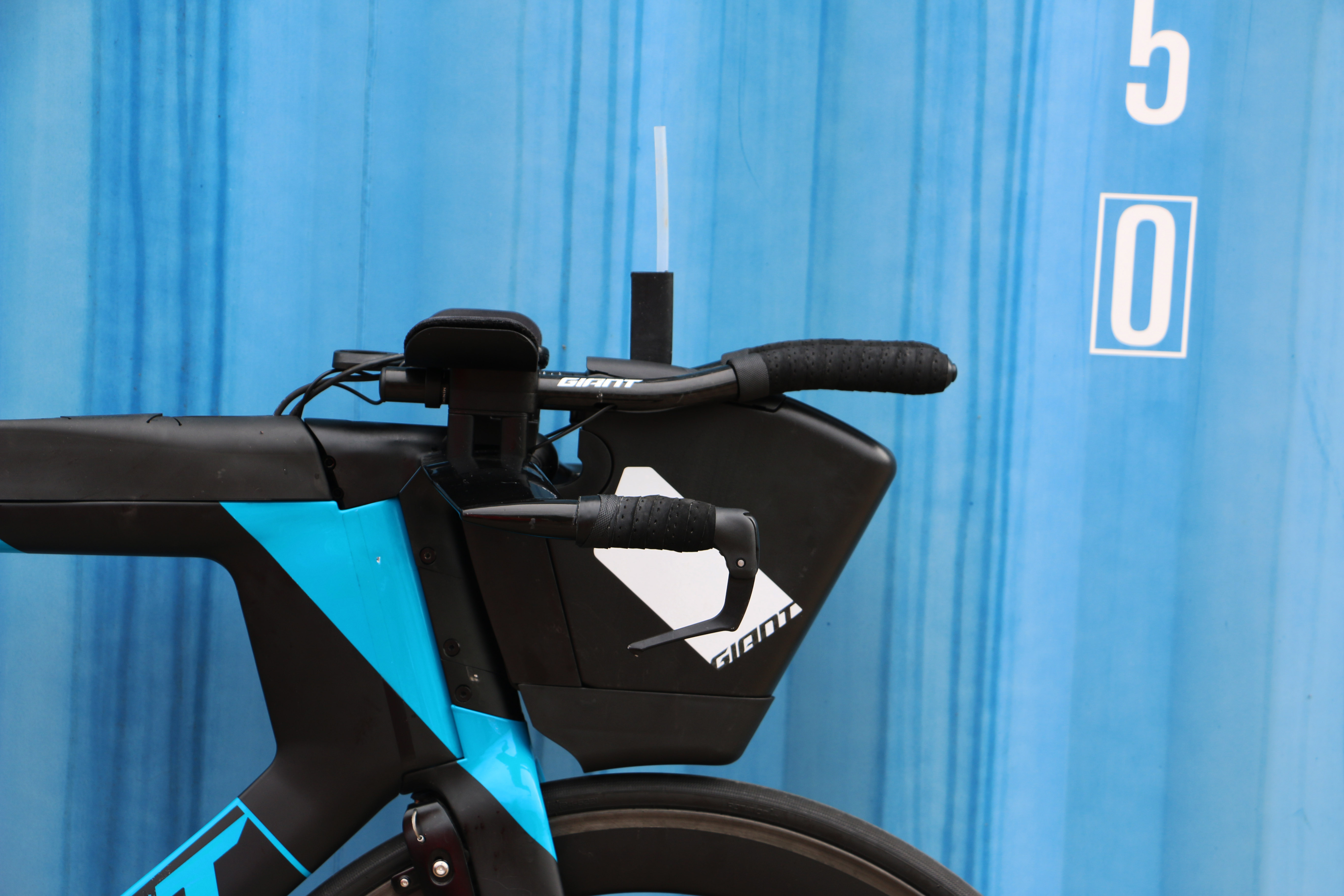 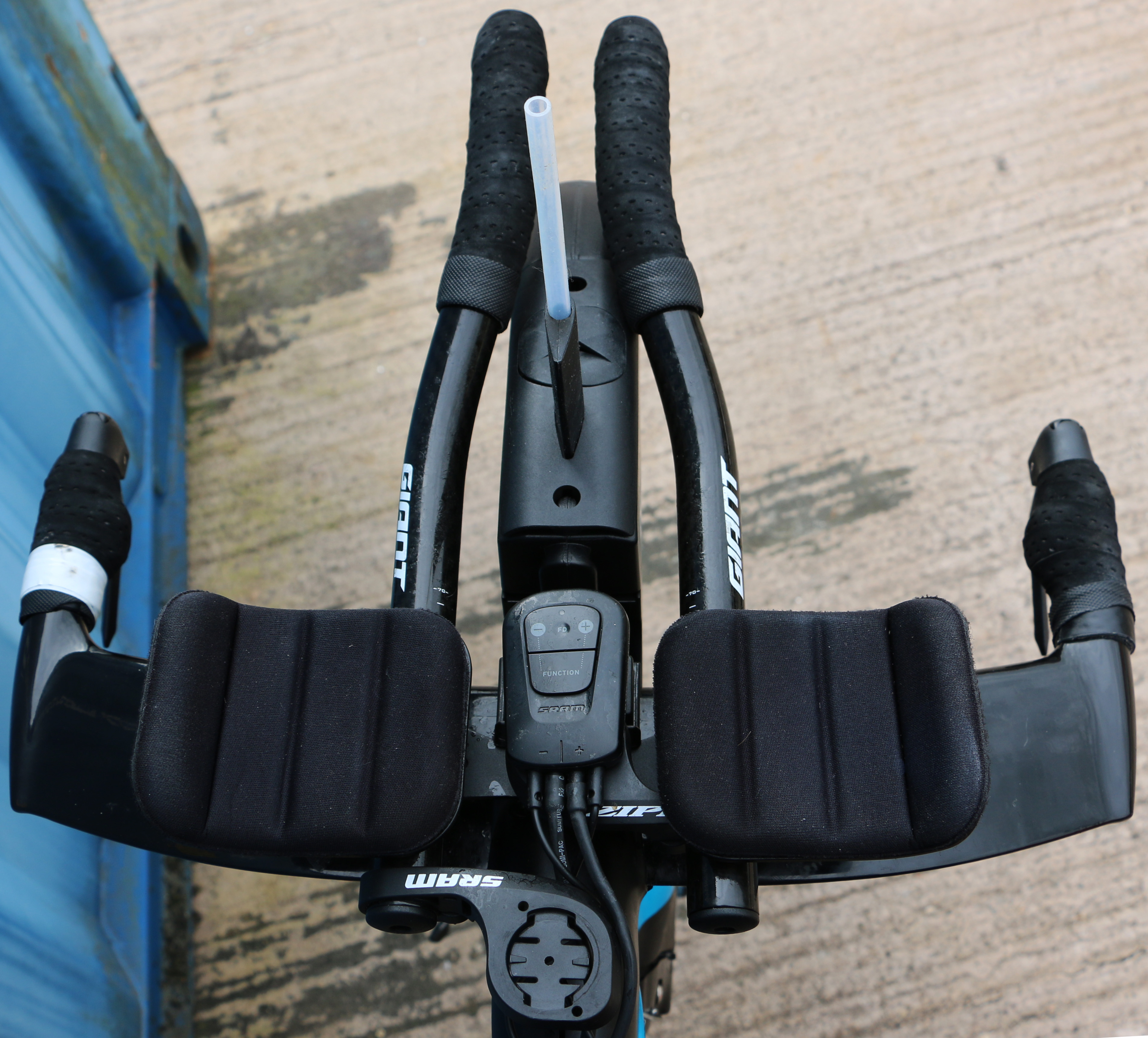 With triathlon-specific 5:1 airfoil base bar the Giant Trinity delivers a new upgraded performance and features a reversible design, giving riders 40-millimeters of height adjustment. With the cables routed internally, there really isn’t a lot to hold you back here. 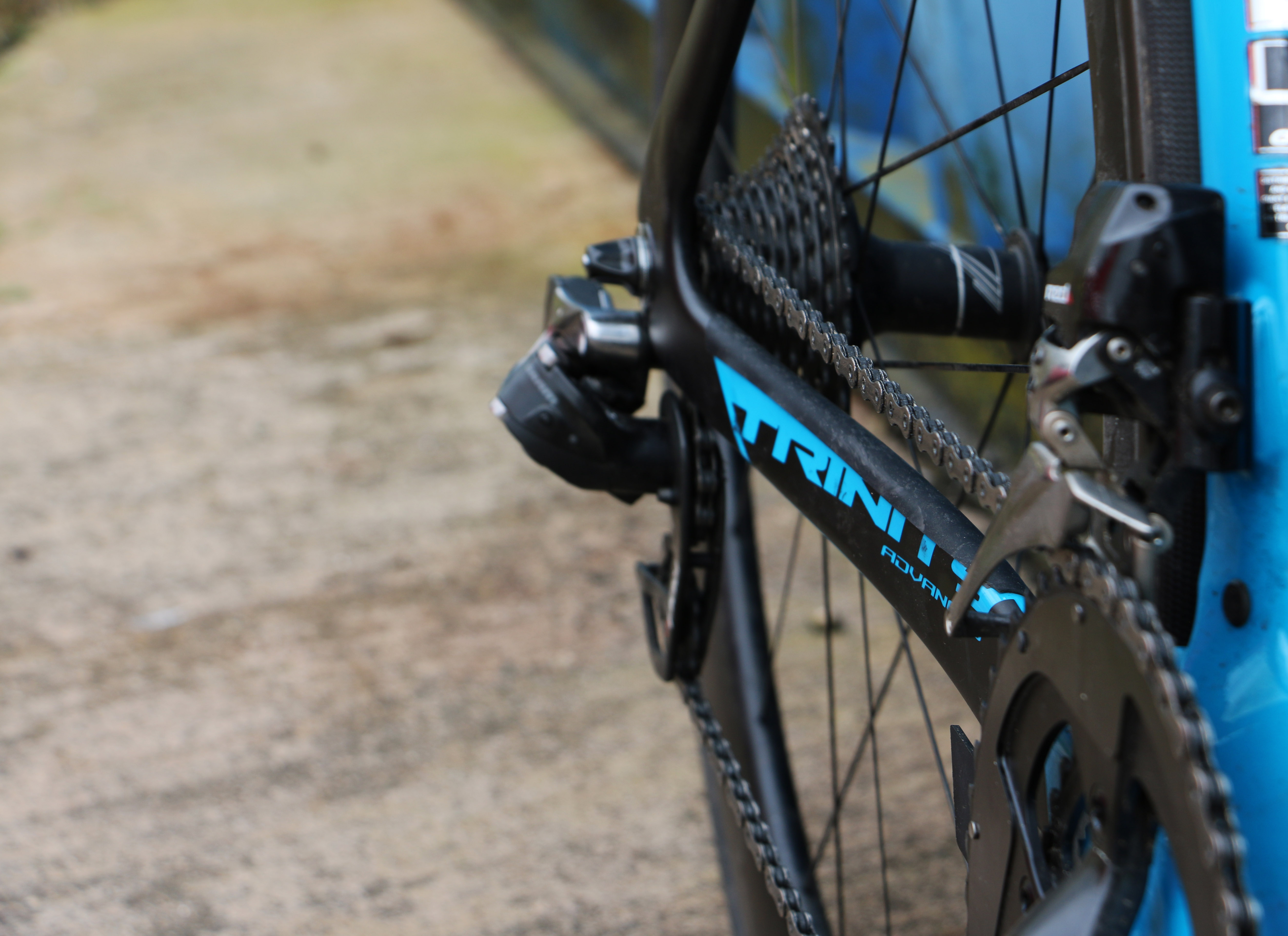 As well as an improved overall shape, coming in the form of a changed top tube, forks and headset. The drive chain has seen some modifications too. A massively oversized bottom-bracket/chainstay area features a fully integrated, 92-millimeter-wide bottom-bracket design. Asymmetric chainstays provide additional stiffness on the driveside and stability on the non-driveside. 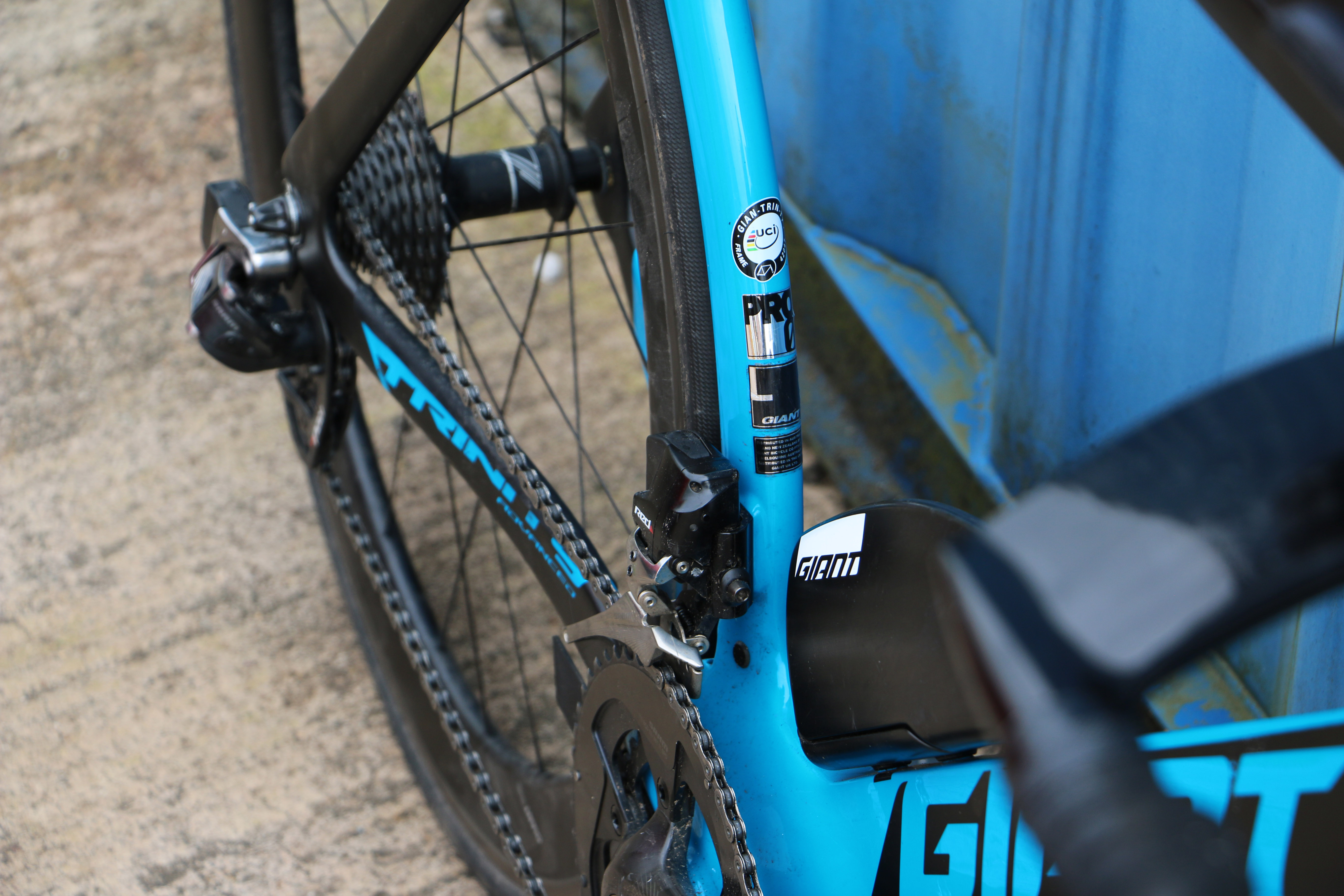 The Giant Trinity is much smoother, it holds speed the same but isn’t as twitchy or jumpy. It doesn’t want to be hammered out of the bends and isn’t begging for your legs to hammer it at every opportunity. But the smoothness is somewhat nicer on the legs, a smoother delivery of power and a better overall ride. Claiming to be faster than any other TT bike as a complete set up – we’d certainly say that it’s up there. 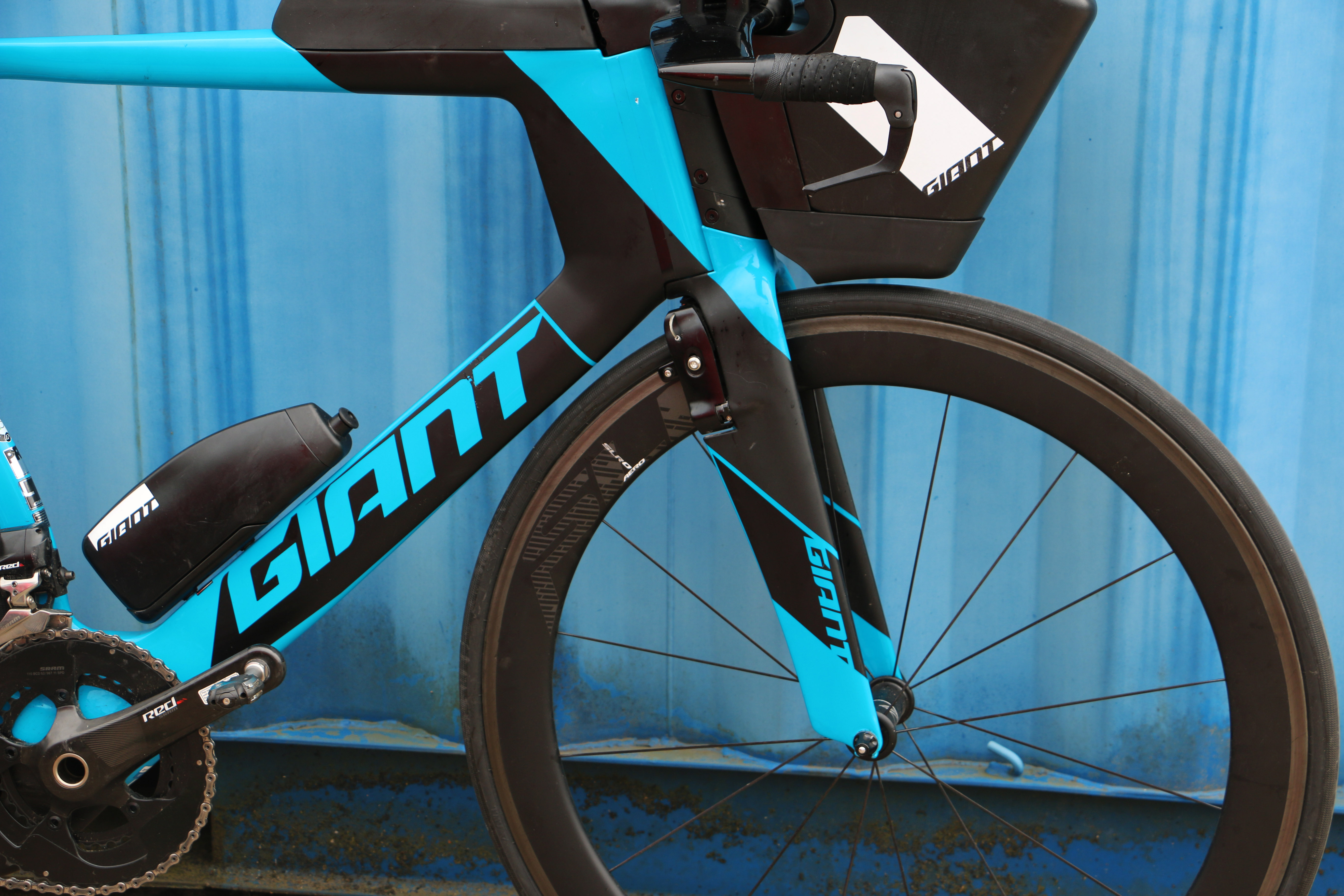 The bike holds speed amazingly, looking down at the garmin and seeing 45kph on a fairly flat, slightly windy section of lakeside road was certainly a shock. Without the legs working too hard the bike feels like it runs well, but it just seems to gather speed as you go. It’s much comfier than a lot of TT bikes we’ve ridden, the geometry just feels right. 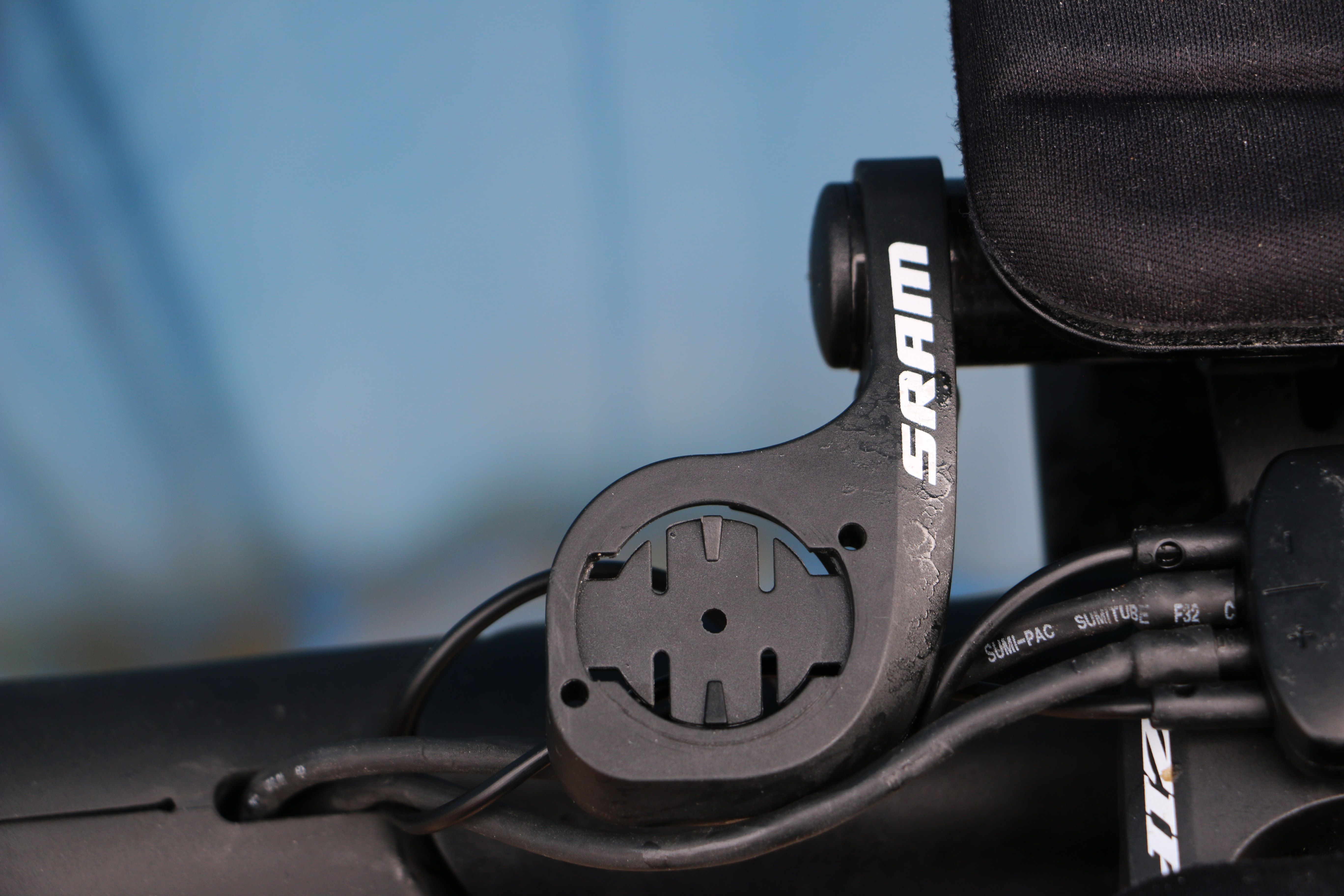 The hydration system on the front is both a blessing and a curse. It holds a phenomenal amount of fluid for you to ride with, up to 1.5L for the bigger system, although this in turn adds a huge weight to the front of the bike. Time trial bikes are already known for having limited weight over the bike making them hard to handle through the corners, so this is definitely a limiting factor. We found that on a gusty day this huge volume infant of the forks made the bike very hard to handle, despite the added benefits of not carrying bottles. The bike can obviously become UCI legal without the addition of this and the food storage system.

The food storage system is itself quite small, and not a lot can fit inside it in the form of bars or gels – although this is always a tricky one to get right as if it’s too large it’s only going to slow you down. Maybe a bit more work looking into this from Giant.

It’s somewhat a shame that the bike doesn’t come with an aero wheel set like some of it’s competitors. We tried the Giant SLR 0, aero wheel in another blog that can be found here, so it’s another factor to consider if you’re after a full race rig. 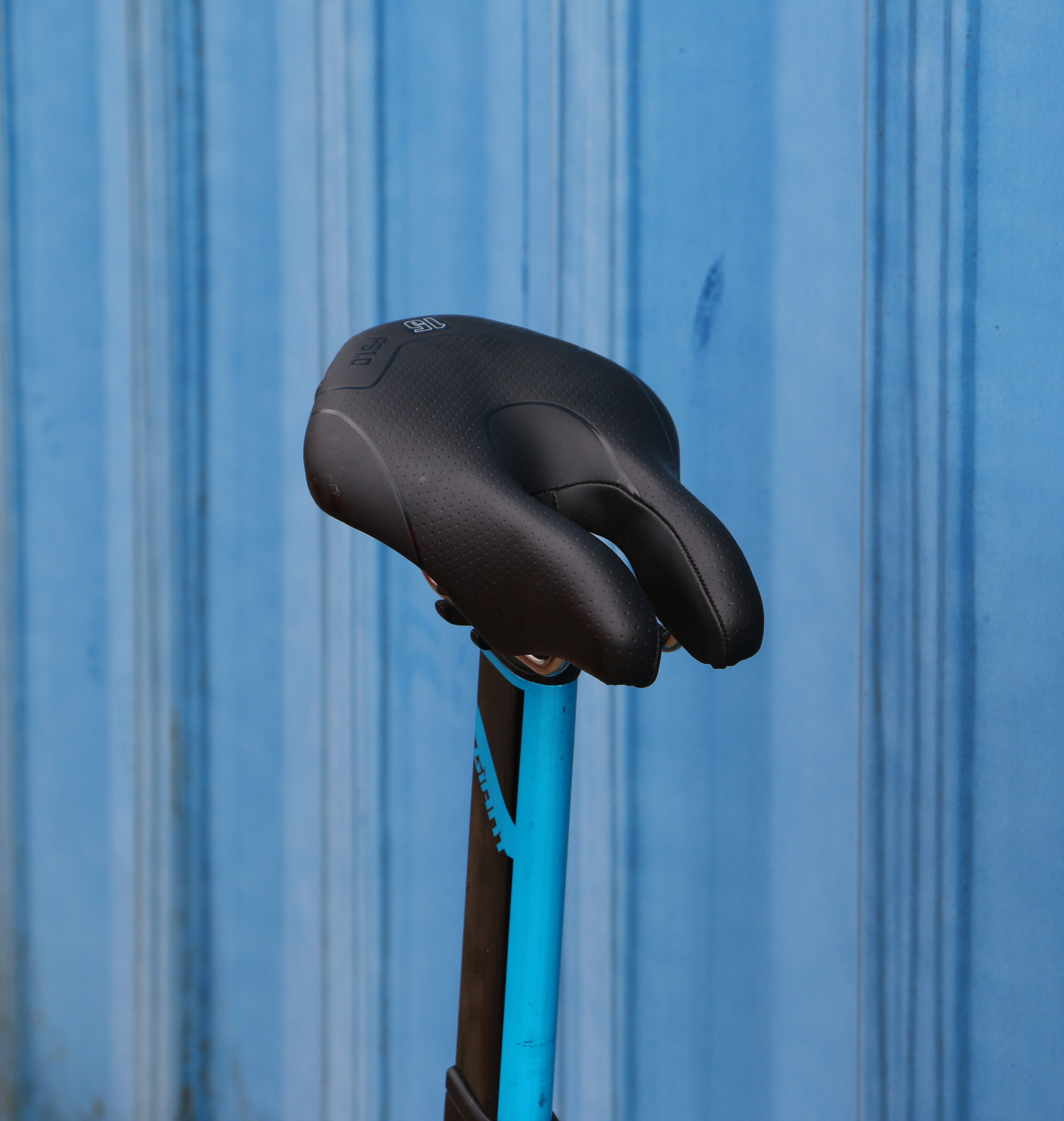 The bike is easy to pack up, the handlebars come of and turn quite easily for travel. Something many people have to consider come race day. The quick release brakes are surprisingly easy to access despite being tucked away in the most aero of places. This can often make them tricky to get to.

The top end Trinity comes with the SRAM RED eTap gears. We looked at these in another review although on the whole we’re happy with them. They don’t align themselves in the same way the Dura-Ace does, although the response is exceptional. And you can mix up the wires to allow the shifters to do whatever you like. On the Giant Trinity there are two sets of shifters as with many top end TT bikes, 2 on the aeros and 2 to match by the brakes. We found that the ones on the bars are very easy to use, although the handlebar buttons are quite hard to find under the bar tape, and aren’t as easy to flick through the gears. 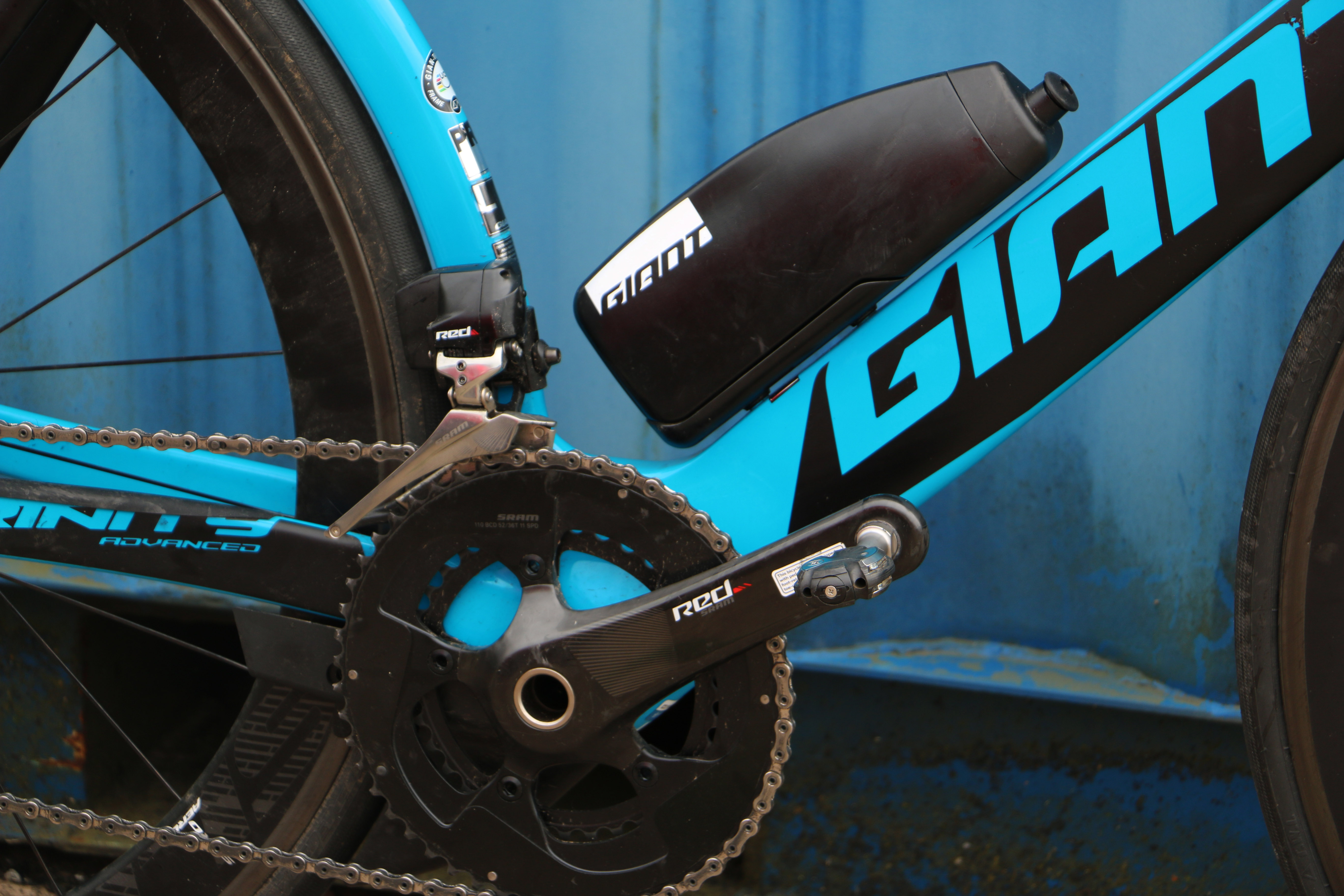 One of our favourite things about the Giant Trinity is the mudguards. Yes, you heard that right, the mudguards. And no, we’re not talking about mudguards that hand over your wheel adding weight and ruining both aero advantage and time trial reputation. The Trinity has some subtle mud catchers at the bottom of the frame to stop the rings & frame getting caked if you happen to take it out on a British summers day in the rain.

To buy or not to buy.

We love the Giant Trinity Advanced 0 and would recommend this bike to anyone. Understated, under sold but undeniably fast. If the fastest time triallist in the world can ride it to victory, we’re fairly sure you’ll be able to get your fill. We trialed it with the Giant SLR 0 Aero wheelset and it really flew. 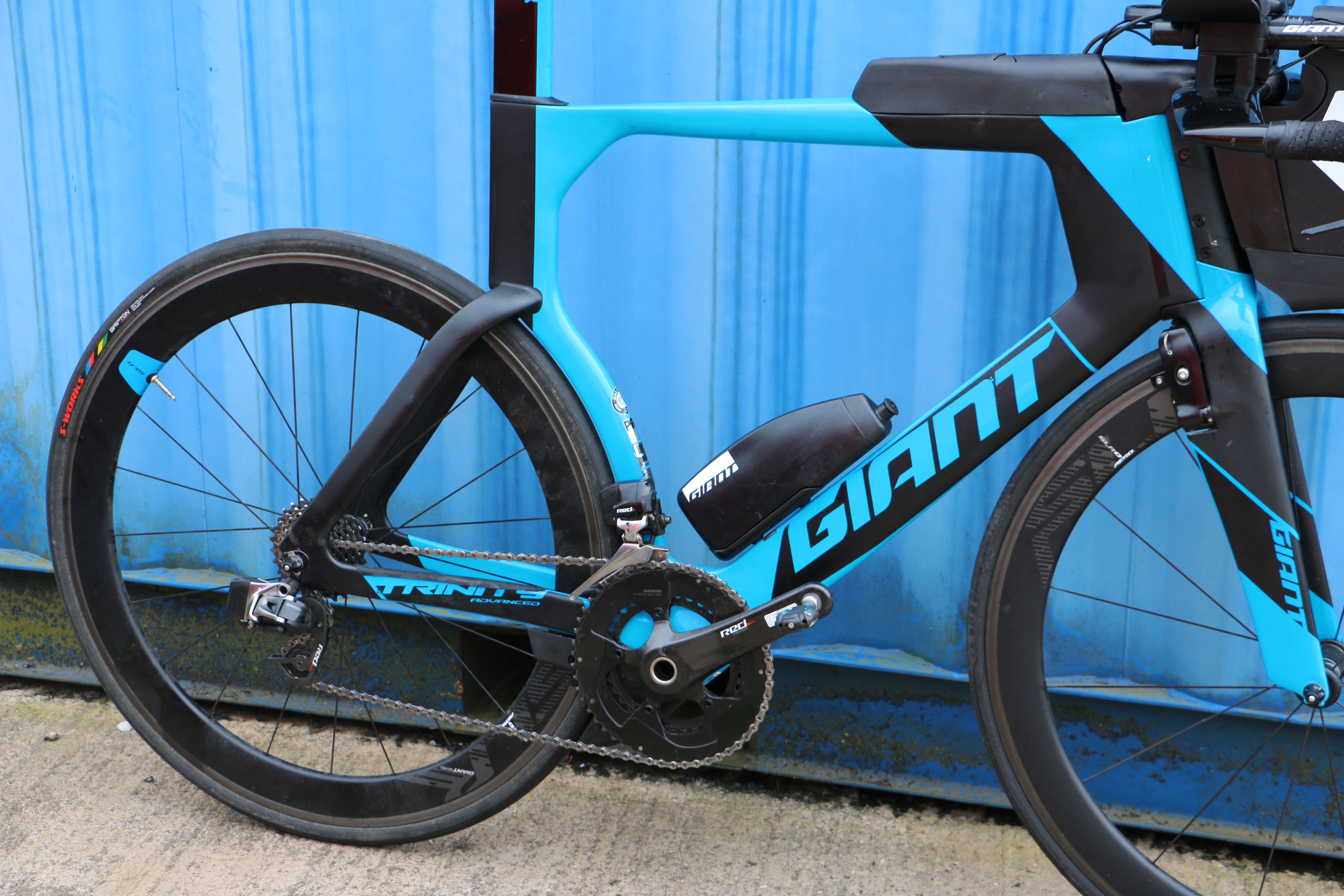 The Giant trinity range is definitely affordable, although you’ll also need to invest in a decent wheel set if you’re looking for top end speed. The hydration system is well thought out, the bottle has been kept aerodynamic and the bike is easy to maintain. The gears aren’t quite as responsive as the Shimano Dura-Ace, but that’s an argument for another day. Easy to handle, great geometry and great numbers, what more do you need? 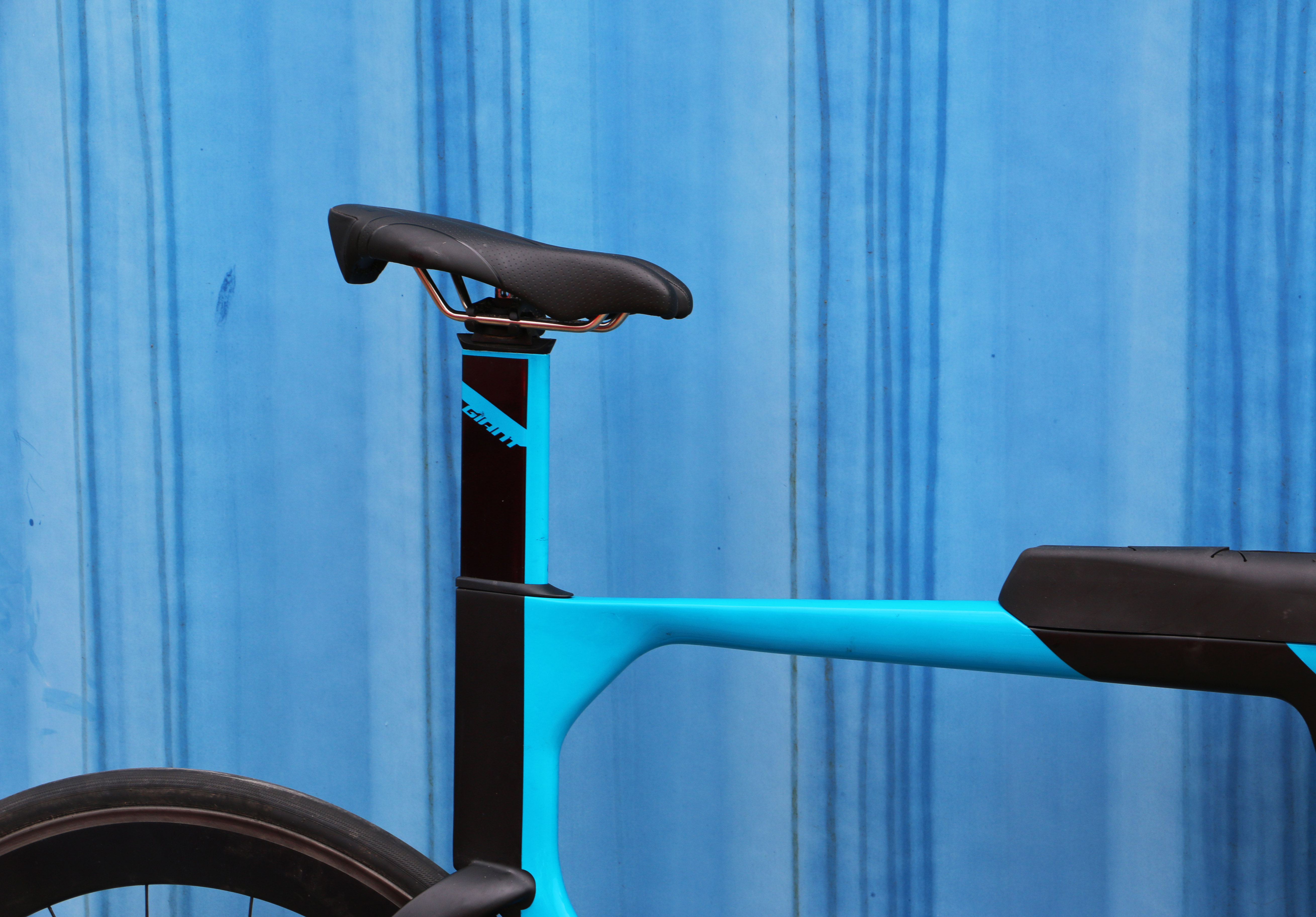