One of the most common questions we get asked here at Cyclestore. You’re looking for a new road bike without the super race oriented geometry of some bikes. Should you get a Specialized Roubaix, or a Giant Defy? 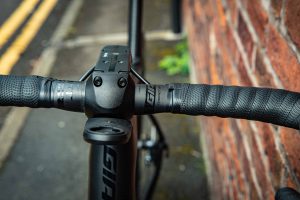 Giants range stops at the Giant Defy Advanced 0, but Specialized have the all singing all dancing S-works Roubaix. With 5 of the top 10 spots at the Paris-Roubaix being claimed by the S-works Roubaix, it’s certainly not hanging around.

The only giveaway that the Giant Defy isn’t an all out race bike is it’s sloped top tube. Other than that, it’s an endurance bike with plenty of the features you’d get to enjoy on a top end “race bike”. Dropped seat stays, internal cable routing, the same group-sets, you name it. Though the new Roubaix now looks like a Tarmac, rides like a tarmac, they’re still geared more towards the cobbles of the spring classics. 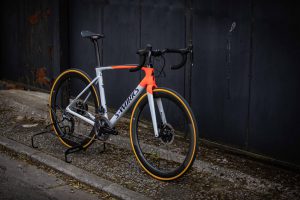 The endurance road bikes are renowned for being more comfortable than the stereotypical racing bike. Slightly higher handle bars giving you a more upright riding position. This allows the hip angle to be opened up, allowing you to activate the gluten a lot more and put a lot less pressure on the lower back. The top tube is shorter and the bars are closer to the saddle making it all a bit more compact. Both the Roubaix and the Defy are less aggressive, but can be set up that way if you wish.

The geometry of the two bikes are almost identical. In fact – when you look at them side by side, it’s hard to tell the two apart. Both more relaxed than the standard road bike, but both perfect for the majority of road riding. 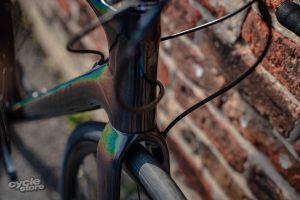 Giant have now taken the D-Fuse seat post technology a step further and applied it to the handlebars. Stiff when the handling is important, but flexible enough to absorb any bumps in the road. It’s a difficult balance that Giant have struck excellently. The way they managed this is orientating the shape of the oval profile to flex when it is pushed from a pot hole or a bump in the road. But it stays perfectly stiff when you’re tugging away at the bars. Giant claim that the handlebars are a huge 30% stiffer than their previous handle bars. 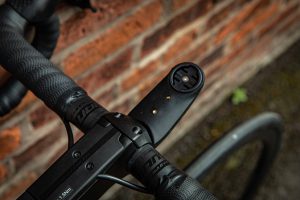 Specialized have tackled the vibrations with their Future Shock suspension design. This is actual suspension unlike the Giant’s deflection. It comes with 20mm of travel and moves in a vertical direction. When the terrain gets bumpy it keeps your momentum moving forward without slowing you down. The Future Shock is positioned right above the stem of the Roubaix allowing the wheels to be held together rigidly by the frame. The wheelbase doesn’t change through the suspension’s travel so you get very precise handling. The future shock 2.0 is controlled via a knob atop the stem. This knob adjusts compression from fully-open to stiff while hydraulically-damped internals control rebound. 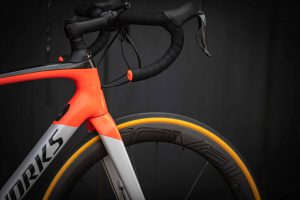 The new S-Works Pavé seatpost is the first compliant seat post that’s also aerodynamic it does so without any additional weight or finicky contraptions. Starting with the same D-shape design found on the Tarmac specialized took it’s compliance a step further by building additional flex into the upper and developing a new drop-clamp design in the frame. This provides plenty of compliance while staying perfectly balanced with the front-end so you get a smooth balanced ride no matter how rough the road.

The Giant is a much better all season road bike than the Roubaix. A slightly lower price tag mixed with the ability to fit mudguards in the winter make the Giant lean towards the yearly rider. The Roubaix is orientated around going as fast as possible over broken surfaces, sacrificing some of the more preferred winter features in the process. Either way, we’d be happy to recommend either of these bikes as they’re both more than capable.