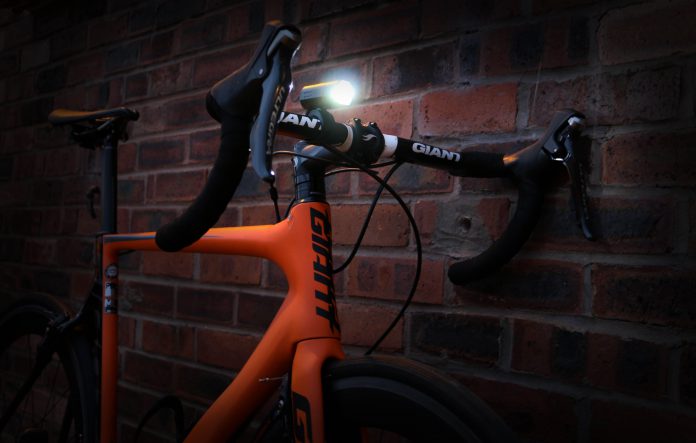 An ongoing topic of discussion in the U.K. Just what should cyclists be wearing out on the roads? Some cyclists won’t be seen wearing hi-vis clothing at night time which can cause a lot of danger in itself. Though ill advised, it’s not against the law. Riding without a bike light however is goverened by law, we’ve outlined exactly what is and isn’t allowed.

Often people mistake the need for good lights with being able to see. While this is partly true if you’re in a rural area, in the city often you’ll be able to see where you’re going guided by street light. The lights are to make other road users aware you’re there to keep everyone safe. This is especially important if you’re not dressed in bright colours.

The law states that cyclists must have a white front light and red rear lights that must be lit at night. Just having them won’t suffice. The bike is also required to have reflectors on the bike. Though you wont be pulled over by the police for not having reflectors if your bike is well illuminated, if you were involved in a night time crash then it could be taken as contributory negligence.

This is reinforced in the Highway Code. Rule 60 states: “At night your cycle MUST have white front and red rear lights lit. It MUST also be fitted with a red rear reflector (and amber pedal reflectors, if manufactured after 1/10/85). White front reflectors and spoke reflectors will also help you to be seen. Flashing lights are permitted but it is recommended that cyclists who are riding in areas without street lighting use a steady front lamp.”

It’s highly illegal to have your lights the other way around, not to mention dangerous! Motorists could be confused about which direction you’re going and pull out on you. So make sure they’re fitted right!

— 7 THINGS YOU WERE NEVER TOLD ABOUT BECOMING A CYCLIST —

Can Your Lights be Too Bright?!

With the huge improvement in bike light technology over the last few years often drivers can complain about the brightness of bike lights. If you dazzle other road users then this can be quite dangerous for everyone, so the police may stop you and issue a fine for this.

But as long as your lights are out of the motorists eyes and pointed at the road, you should be ok! It’s better to not fit your brightest light to your helmet as when you turn to look at cars you may dazzle to motorists coming in the other direction.

I Only Have Flashing Lights, Is that ok?

Flashing lights are allowed as long as they’re both capable of emitting at least four candela and flash anything from 60 to 240 times per minute. This is a frequency of 1-4Hz. Often people run a stable light & a flashing light at both ends to make sure safety is maximized.

Best to check the spec of the lights before you buy them to make sure they comply. This should be easy to see on the packaging or website that you bought the lights from. If you have any queries, contact the seller! Most bike companies will be more than happy to help.

Do I Have To Use Lights In All Low Level Light?

Surprisingly bikes are on of the only vehicles that don’t have to have lights fitted in low level light conditions. This means that no matter how dark it gets, technically you only need your lights switched on from sunset to sunrise. Though the time requirement is judged from when the sun drops beyond the horizon, it’s advisable to have the lights fitted at all times so you can turn them on if you get caught out in some fog or heavy rain.

Having the lights to help other motorists see you when the weather is darker will help to keep everyone safe out on the roads.

— BEGINNER ERRORS THAT ARE AFFECTING YOUR CYCLING COMMUTE —

Can I Use A Dynamo?

A dynamo is perfectly legal as long as it complies with the above requirements. Though it will stop when you do, there shouldn’t be any issues if you’re pulled up on the left. This can often cause confusing with oncoming motorists though if you’re stopped and they don’t know you’re there.

Modern dynamos often come with a stand light which will stay lit from a store of power even when you’re at a stand still.