So bike of the month is something we’ve been meaning to do for a while, we’ll choose a bike and tell you why we like it or simply which one has been most popular with riders this month. Sometimes it will be a brand new bike other times a classic from the workshop. Hope you enjoy!

GIANT BICYCLES – ALL YOU NEED TO KNOW.

This month we’re starting with the Giant Anthem which has had an overhaul for 2017 and has been particularly popular this month. Launched in 2005 with 85mm of rear wheel travel (you can find the original launch on cycling news here) Giant’s Anthem has evolved over the years into today’s model that is one of the most versatile bikes on the market.

Today the Anthem has 650b wheels, 120mm of suspension upfront and 110mm out back. The angles are up to date and slack for a “short travel” bike. Maestro is still used by Giant, again this system has evolved but Giant are struggling to better it, this year the linkage goes to carbon across all models including the Anthem 3 which comes in at £1649! This new link is lighter and stiffer than aluminium links previously used.

The back end is Boost and so are the forks to keep up to speed with the industries latest and greatest. Aluminium and carbon frames are offered across 7 models and varying budgets from the aforementioned £1649 to £5999.

With its short, by today’s standards, efficient suspension, light weight and slack angles, the Anthem can tare around trail centers, all day Peak District loops or zip tie a number board on and your good for a marathon or xc race. Carbon wheels also feature on the top aluminium model and all carbon models.

BIKES FOR EVERYONE – LET US HELP YOU CHOOSE.

Which would I buy? The Advanced 2, carbon frame, wheels and a Sram/Rockshox finishing it.

What about the ladies? Well Giant’s “Sister” brand Liv has the Pique, which is the same but different. 120mm front and rear and ever so slightly tweaked for a female rider. 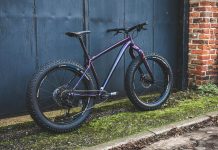