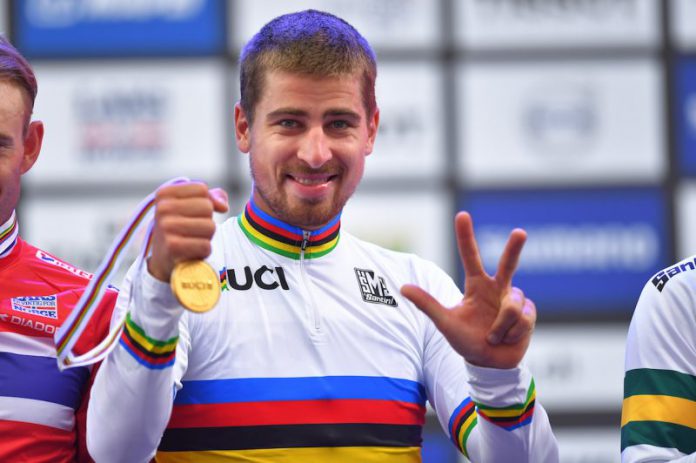 An illness earlier in the week certainly didn’t stop a lightening fast Peter Sagan from earning the top spot at this years UCI Road Race World Championships. No foreigner to the rainbow jersey this is the third consecutive Sagan has been on the top step. Making him the first rider in history to do so. After being disqualified from the Tour De France earlier in the year despite wearing the green jersey, he remained the bookies’ favourite for the race.

A fast paced final lap had all the riders weak at the knees although it was Sagan that flew around the final corner and into the front of the race. Out powering Alexander Kristoff & Michael Mattews, to second and third respectively, in what ended as a photo finish on the line with a perfectly timed bike throw. 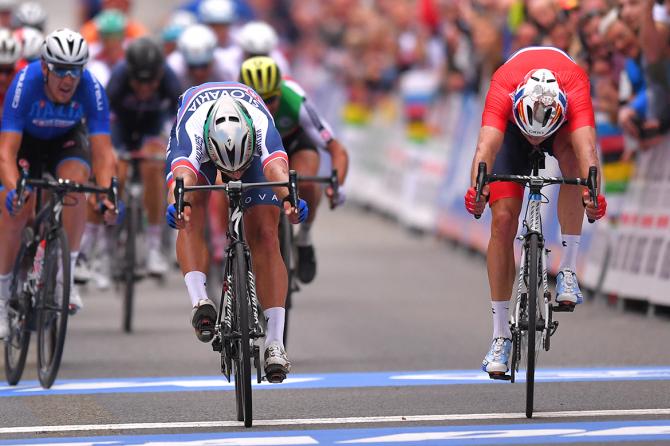 There was no real organisation for the sprint finish, an earlier attack hadn’t left a lot of time or power for the legs of the trains to get firing. Kristoff was the first to put his cards on the table, but Sagan, the forever calm & patient hunter, turned on the gas leaving it with centimetres to spare.

The peloton had split on the final ascent of Salmon hill a few KM prior to the finish, with only 26 making the cut. Julian Alaphilippe was once again the instigator trying to launch himself into a solo finish at the top of climb with Giovanni Moscon hot on his wheel. Caught inside the final two km, we did wonder if the larger group were fully in control. 267.5km of racing, decided by a few centimetres.

The TV cameras didn’t quite catch the end of the race, so everyone watching was as surprised as Sagan to see him mixing it up in a real thriller for the world title. In the post race interview Sagan confessed he didn’t think he had to legs, before confessing he too was shocked, overwhelmed but happy with his victory. “For the last five kilometres, I said to myself, it’s already done. But it’s unbelievable. Something special for sure.” Before making a great sentiment in dedicating the win the Michele Scarponi, the day before his birthday, as well as his newly pregnant wife. 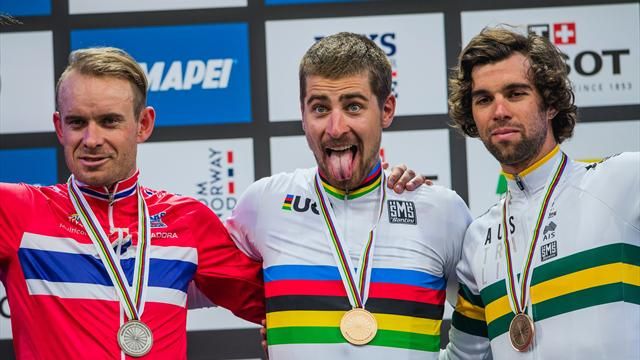 The Race as it Happened:

The rain held off for the start and as soon as the neutral service vehicle had shifted ten riders jumped off the front of the peloton. Happy to see them go the peloton let the group out to a lead of almost 10 minutes within in the first hour. The first 10 laps were very steady as the peloton bumbled round until the breakaways lead started to diminish, the Belgians dictating the pace.

A few attempts were soon swallowed with Norway & the Czech Republic driving the efforts to haul back the breakaway. Before the men from the Netherlands moved to the front for some big efforts. With their countryman Tom Dumoulin already taking gold in the time trial, they were keen for another. Bringing the gap to the leaders down to 30 seconds before Julien Vermote of Belgium, finally drove the dagger home despite having spent most of the day on the front. A shame he later had to abandon the race due to a crash.

More breakaway attempts couldn’t hold off the power of the peloton, despite containing some dangerous riders including Lars Boom, Tim Wellens, Jack Haig, & David De La Cruz. The penultimate came wit a lot of cases in the peloton taking out some big names & causing damage to the ranks, shortly before Tom Dumoulin tried his luck, but didn’t quite have the power after his recent victory.

Haig, Eiking, De la Cruz and Wellens remained at the head of the race, but they were caught with 25 kilometres to go after their former breakaway companion Boom reeled them back and a group of almost 80 riders were present at the start of the final lap.

Paul Martens, Sebastian Langeveld and Tony Gallopin all made an attempt at breaking clear but none could make it stick. A large crash at the bottom of Salmon Hill yet again removed a lot of riders from contention. At the top of the climb Alaphilippe went clear wit Moscon, a promising move that last right up until the final 2km, with Alaphilippe attacking again on the cobbles with 4.5km remaining.

Local countryman Kristoff attacked with 50m to go and looked in the hot seat to secure Norway’s second elite men’s world title, only for Sagan to come around him in the final 50 metres to write himself into the history books yet again. 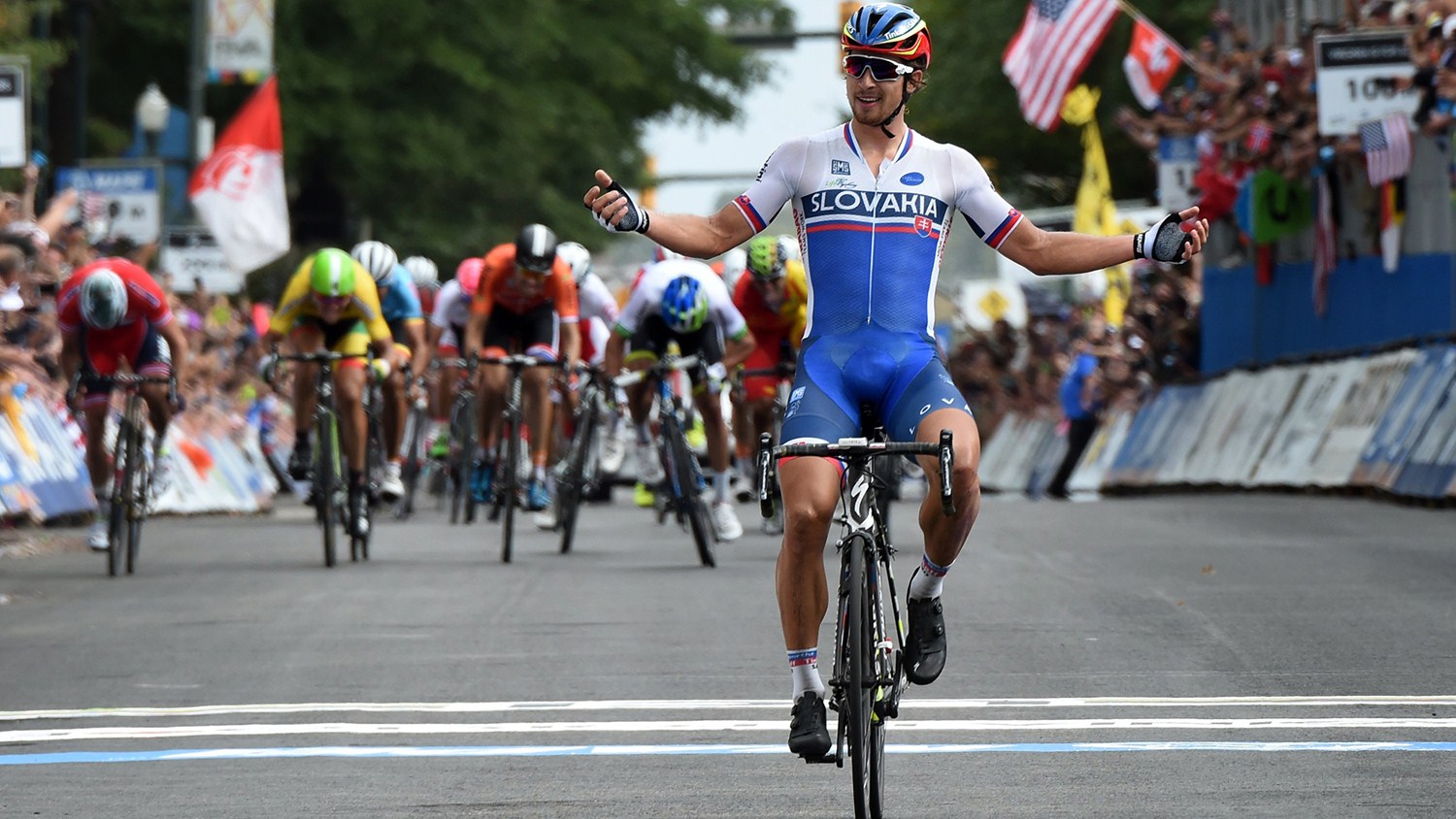 Make sure you head to Cyclestore to see our range of S-Works Tarmac.