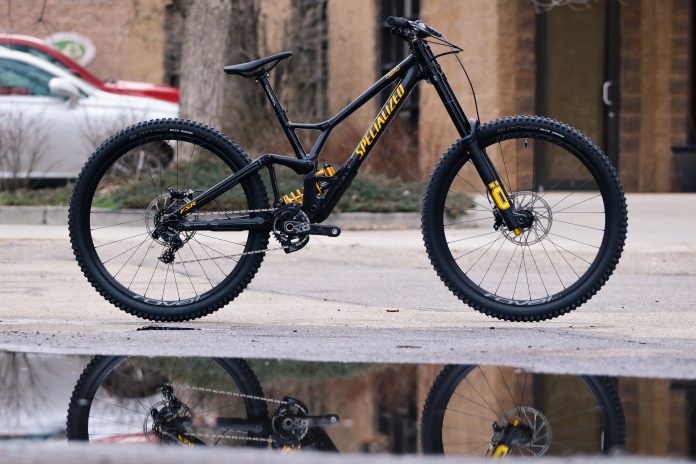 Building on their existing pedigree, Specialized have worked hard to improve their Demo bike for this season. The legendary Demo 8 already delivered plenty of World Cup podiums and World Championship titles. But how do you improve on that? You rework every inch of the beast to wring out even better suspension performance and efficiency. The Demo 29 raced itself to a World Cup Podium on it’s debut, and it didn’t stop there. 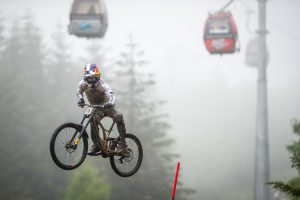 New chassis, new geometry, and radically new suspension kinematics. It’s Full-Gas. Full-Fast. And already making big waves with the professionals. Riders tend to get particular about their bikes when races are won and lost by fractions of a second. Which explains why the new Demo 29 is the result of years of field-testing, nerd’ing out over suspension data acquisition, and what might seem like an irrational degree of R&D and shuttle runs. Then again, when the fastest racers on earth are your R&D team, you listen. Because every fraction of a second counts.

The Demo 29 works to feel incredibly smooth on square-edged hits. Scientifically speaking, square-edged impacts suck. They cause your rear wheel to momentarily hang-up on impact. The impact your suspension should be absorbing is, instead, transferred to you and your frame. That means more fatigue and less speed. But by giving the Demo 29 a more rearward axle path, Specialized have minimized that rear wheel hang-up on square-edged hits. Offering instant speed right off the bat. 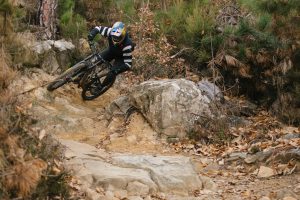 Another focus of the Demo 29 is the improved control while braking. Imagine: you grab a handful of brake, your weight pitches forward, and your rear wheel loses traction precisely when you need to be low, centered, and in charge. Specialized built in just the right amount of anti-rise on the Demo 29, so when you need to come to a quick stop, you stay stable and in control.

The Demo 29 converts every bit of your pedaling power into speed. The bike’s new kinematics allow for just the right amount of anti-squat. Or to put a finer point on it, you crank on the pedals and it rips forward instead of bobbing around uncontrollably and slowing you down. 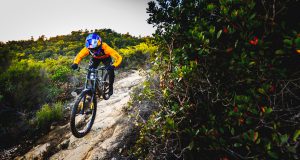 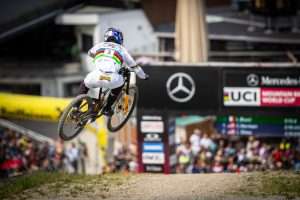 The Demo 29’s new shock linkage not only places weight low on the frame, it also enabled us to isolate the rear shock from side-loads, which reduces wear and tear on the shock. What’s more, the Demo 29’s trunnion-mount shock features extra bushing overlap, further boosting longevity.

How does it move? 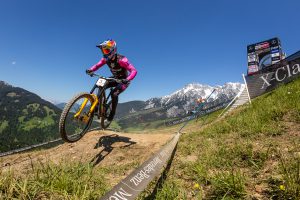 The anti-rise on the new Demo 29 has increased by 70%. Specialized spent a lot of time working with Loïc Bruni, and the rest of the team, to dial-in the ideal amount of anti-rise. Loïc, in particular, came to the Demo 8 after competing on a single-pivot bike that featured much more anti-rise than his Demo 8. 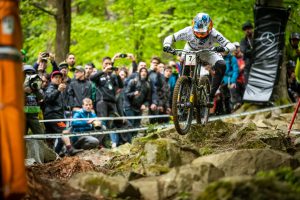 Specialized always felt that the Demo 8’s low levels of anti-rise contributed to its rear suspension’s great sensitivity. The suspension stayed active when you were on the brakes, and we liked that. The bike did, however, have a tendency to pitch you forward slightly when you grabbed a lot of brake. On steeper tracks, that can be unsettling. You could clearly adjust to that trait and ride fast as hell. Loïc, Gwin, Brosnan, Finn, Miranda Miller, and tons of riders around the world proved that point.

It’s claimed that Specialized didn’t initially go chasing anti-squat (that is, attempting to get more of it) when setting out to design the new Demo. That said, since anti-squat is affected by a host of factors, including instant center, rear axle path, and chain forces, we wound up with a higher anti-squat value in this new Demo than was ever featured in its predecessors. Anti-squat increased (Demo 8 to the new Demo 29) by about 300%. The feedback from the team was unanimous—they liked how the increased anti-squat improved the Demo’s pedaling performance.

This certainly isn’t a bike that you’ll be using to play around in the park. An all out racing machine that’s the product of years of research and development. If you’re serious about being competitive and going fast, we’d definitely consider this bike!